Welcome Margaret Grace, miniaturist and author of Mourning in Miniature! 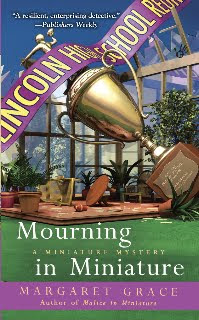 Book four in the series, MOURNING IN MINIATURE comes out today! Be sure to check out the contest after the interview - and come back tomorrow for a special how-to by Margaret!

In MOURNING IN MINIATURE, miniaturist Gerry Porter has been looking forward to her thirtieth high school reunion. But when a former athlete is murdered, Gerry must employ all her skills to reconstruct the scene of the crime. Read the prologue of the book.

Writing What She Loves: 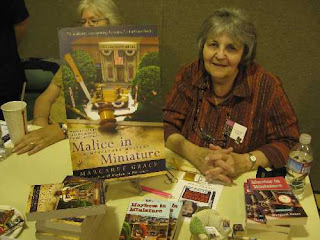 Camille Minichino built her career writing about her favorite topics. Given that she has a Ph.D in Physics, it seemed natural for her to write her first books, the Periodic Table of Elements Mystery Series.

As a writer, and a collector, Camille has the best of both worlds! (Who says you can't be paid for your hobby? Hmm, wonder if that qualifies miniatures as a tax deduction now? ha!)

Camille knows she's lucky to be able to do what she enjoys. Writing "was the next thing to do once I finished with physics," she says. "I'm definitely blessed. My hero was Isaac Asimov who wanted to 'never have an unpublished thought' and I'm on my way!" 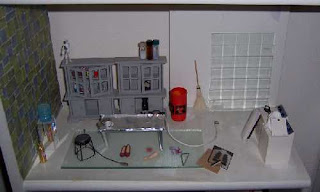 Camille actually found inspiration for some of her miniature scenes through her first series of eight books, beginning with THE HYDROGEN MURDER.

Since her protagonist Gloria Lamerino, a retired physicist who consults with the police on science-related murders lives above her friends' mortuary, Camille naturally had to make the scene in miniature.

She also enjoys creating different miniature scenes and vignettes to give away as promotional prizes or to auction off for charity. This hospital scene was auctioned as part of a May 2009 fundraiser for the Eden Medical Center in Castro Valley, Cal. 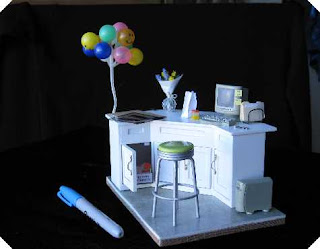 Not surprisingly, many of Camille's other scenes center on mysteries, too. Bet you never thought of a bullet casing as the perfect miniature vase, did you? 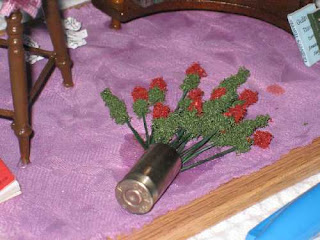 So, what's next in miniature?

She says, "usually I'll teach myself a new technique and then use that for a couple of scenes. I have a new product that is great for making mini flowers and I'll be taking it to Bouchercon for the 'Make-and-Take' in the crafts room." 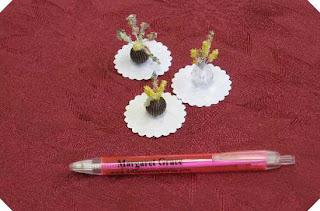 (She'll be explaining how she makes her miniature flowers in a craft workshop at this month's Bouchercon mystery conference, held Oct. 15-18 in Indianapolis.)

It should be interesting to see what reaction the miniatures get from mystery lovers. She says the response usually is encouraging: "I get a lot of people who just like the idea of Murder She Wrote meeting Nancy Drew." 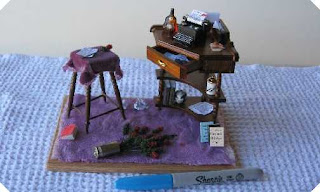 Now about the Books:

Q: What is your favorite part of writing?

A: "The research. My favorite part of working on MALICE IN MINIATURE was researching the Lincoln-Douglas debates, which provide the backdrop for the story. I was writing it around the time of our 2007-8 debates here. It was fascinating to compare the formats (long, issue-oriented speeches in 1858; sound bites in 2008!)"

Q: How have the books changed as the series moves along?

A: "I had to figure out what Gerry's arc would be. She's been a widow for two years. Time to break out and be open to new relationships? Turns out, not! That had to wait until the new book, MOURNING IN MINIATURE."

Q: You mentioned getting stuck when you write - did you get stuck in this one? How'd you work your way out of it?

A: "I always get stuck! I write too sparsely, then have to go back and pull out threads and add subplots to reach my goal of 80,000 words. In MALICE IN MINIATURE, (not to give anything away), I pulled out a character in the television studio and gave her a family, and so on." 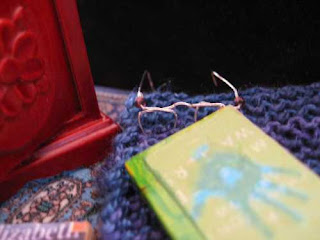 Q: How many hours do you write? Do you have a special writing spot or office?

A: "I'm lucky to have a well-equipped office, but I also carry my characters around in a notebook and have them join me in coffee shops. I don't have a set, structured schedule; that would freak me out."

Q: How much promotion do you do?

A: "More and more it seems. It's almost scary to go to sleep, lest I miss an opportunity to socially network. This year I've been to LA, Omaha, San Diego, Washington DC, New York, and I'm headed to Indianapolis and then Boston. The mileage for my local travel last year was the equivalent of crossing the country."

Q: What are your other jobs?

A: "I work part time at several jobs -- scientific editing at a lab; teaching an online science class for a university; teaching workshops at community colleges. The specifics are on my website, http://www.minichino.com/ under classes."

Q: Any thoughts on publishing and the changes going on like the Kindle?

A: "My books are on Kindle, though I don't have one. I'm waiting for all the beta versions to be finalized! I do think e-reading and e-publishing are here to stay and grow, though I'm nostalgic about the smell of paper and ink or the 'feel' of a paper book."

Q: What keeps you motivated in your writing?

A: "I love book events and talking about my books, words, the writing process. I think I write so I can talk." 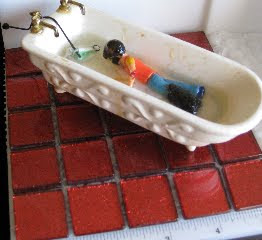 Q: How in the world do you juggle it all: job, meet deadlines, promote minis, arggh!!! (Are there two of you? ha!)

A: "Once you get to my advanced age, you need less sleep!"

A: "There's another coming in the spring, MONSTER IN MINIATURE. It's a tough decision how to age characters, especially this little girl. I don't want to deal with teens, fictional or otherwise, so I'm keeping her preteen no matter how long the series goes on!"

Q: Any new ideas and projects?

A: "Always! I'm working on a TV treatment, a feature film, a mainstream novel, a kid's science book, a romance, a business communications book ... and of course another mystery series that I can't reveal yet!"

Q: After that, is there anything else left you'd like to do?"

A: "All of the above, and then go to lunch with Joyce Carol Oates, Richard Russo, and a hired assassin."


** Read about the Miniature Mystery series.

** See her miniature how-to in part 2