Miniatures in A to Z Blog Challenge Magazine 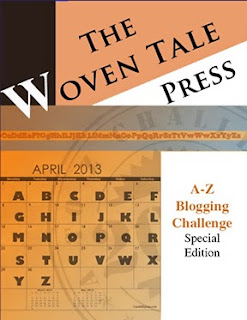 Something a bit different:

My blog post during the A to Z blog challenge (D is for Miniature Dresses) is included in a neat online magazine, The Woven Tale Press.

Fun way to peruse a variety of different topics. Check it out!

Check out my take on surviving in city vs. country during a zombie attack in "Staying Alive: City vs. Country" over at the New Zombie-Fiction blog.

Another miniatures project for the Ladies' Shoppe - mini lipsticks

Thought I'd posted this here too... Thought  this came out really neat. Fiddly but worth trying. Going to do another with a different graphic... Isn't that cool? Something for a table in the ladies' shoppe... 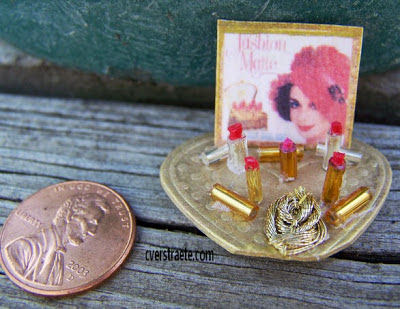 Wanted to share a quick preview pic of the miniature Ladies' Shoppe I'm setting up. This is the smaller roombox. I have a larger one which will hold more items as well.

The two large cabinets in back are - ta-da! - thimble cabinets!! Been saving them and thought they'd look perfect painted white and filled with shoes and shoe boxes. I have another one to use for potion bottles in a wizard room I have to finish.

Just was setting up this room to see what fits. The space on the right wall will have mirrors and a hanging rack with dresses.

It'll be neat to see the before and after photos once everything is painted and decorated. I got this box decorated from the flea market for -- $5. All it needed was a top molding and I have to put electric in yet.  (click for larger pic) 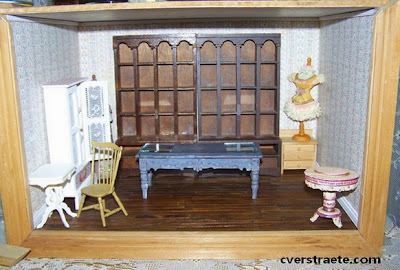 Why My Love Life Sucks, The Legend of Gilbert the Fixer - it takes a geek to be a hero 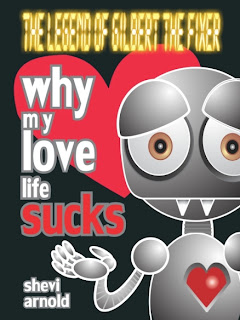 Seventeen-year-old Gilbert Garfinkle is the ultimate tech geek. He likes to take apart, figure out, and fix things, and he dreams of someday fixing the world. But now his own life has been taken apart by the one thing he'll never be able to figure out. Her name is Amber, and she's a gorgeous girl with a killer smile who wants to turn him into her platonic BFF--literally forever! It's the ultimate geek's ultimate nightmare, and it leaves Gilbert asking life's ultimate question: "Why me?"

When I was little, I'd take them apart and analyze them, kind of like what Gilbert Garfinkle--the hero of Why My Love Life Sucks--does with electronics. This continued into my college years, when I majored in English Literature and Theater Studies.


For twelve years I worked in magazines and newspapers as an editorial cartoonist, illustrator, editor, arts-and-entertainment writer (specializing in children's entertainment and, of course, comedy), and a consumer columnist.


My last job was at the Jerusalem Post, but I had to quit when my family decided to move to New Jersey to pursue better education options for my autistic son. 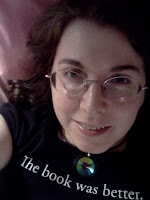 This was in February 2001. Since then I've written 40 picture books and seven novels for kids and teens, four of which I've indie published. I was an ABNA quarterfinalist with Why My Love Life Sucks, and I won third place in SmartWriter's Write It Now contest in the the YA category (which was judged by Alex Flinn, the author of Beastly) for my romantic, YA ghost story, Ride of Your Life.


* In case you can't find the other links, I've removed the stories from online so I can publish them elsewhere.

Catching up for Story A Day for May so there're three stories and an amazing video.

Today's prompt is to finish Sam's Story. Sam just got a dream promotion, or so he/she thinks....

The dream job Sam had wanted was finally within reach.

Any other time she would've jumped at the chance...

She took the letter from the envelope and read it once more.

All her hard work had finally paid off. All those hours and late night meetings.

Lead, it said. No more late nights. The opportunity to do more of the kind of projects she liked.

With a sigh, Sam crumpled the envelope and threw it on the floor.

It was too late now. Joke's on her.


Above
by Christine Verstraete

From my perch above, all is beauty.
Dots of light become stars on earth. Seas are spots of azure. The land is green and bright.
No decay, no death, no war.
Perfection.

No one expected the virus to do this.

Those who died came back and wandered the earth. Hungry, devouring, unexpected.

But the babies... so innocent, so precious.

When they began undying, panic set in. No one knew what to do.

I took them in.

I looked at my hungry charges, their faces gray, their eyes a milky white.

I filled the baby bottle with liquid protein made from raw meat. Disgusting, but necessary. The zombie baby grabbed it eagerly and began to suck.

It worked... for now. I wasn't sure how I'd handle it if they stayed alive and undead, if they continued to grow and thrive.

For now, I cared for them like any mother would, smiling when the baby's tiny hand caressed my cheek. 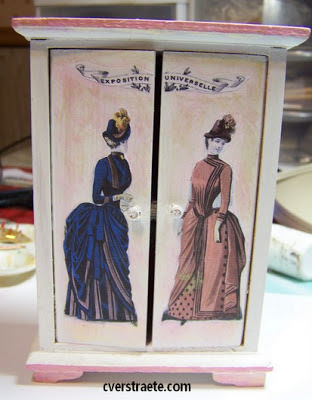 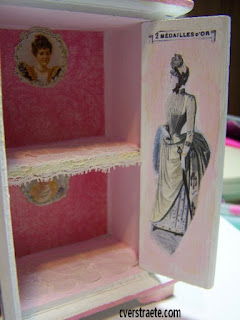 This is one of those wood cabinets from Michaels. I want to fill it with a bunch of different type boxes. I decorated it with scrapbook paper on the back and top, then glued Victorian lady figures on the front and inner doors that I found at The Graphics Fairy.

I love how this came out!  There is lace on the shelves and the shelf edge. I put Victorian lady stickers on the back walls. I replaced the knobs with regular dollhouse knobs that I painted white.


Next, I want to decorate another cabinet with a large door and a pole inside to hang miniature clothes. These will go in the display room for my miniature ladies' shoppe that I'm planning. More minis are at my website. 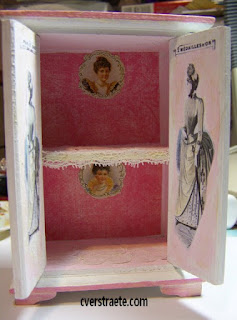 I had to share! Just got my bookmarks for GIRL Z: My Life as a Teenage Zombie. Aren't they cool?? (minus the fingerprint of course!)

The black is glossy in front which is kind of neat. Stay tuned for a giveaway with some other stuff. 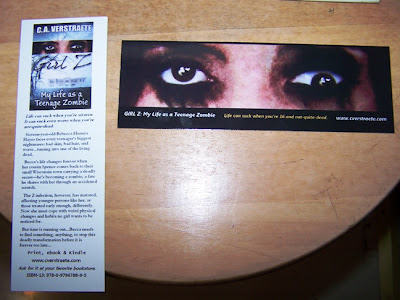 Blueberry Muffins, a treasure among the Vikings? Yes, in The Buttersmiths' Gold

Taking a break between A Story A Day to share this book  - a cute concept! Check out the trailer at the end and be sure to enter the contest for an Amazon gift card! 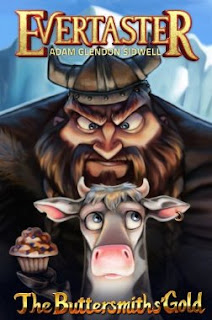 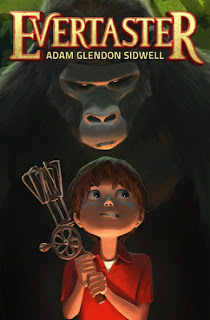 Everyone knows the most coveted treasure of the Viking Age was blueberry muffins. Blueberry muffins so succulent that if you sniffed just a whiff, you'd want a whole bite. If you bit a bite, you'd want a batch; if you snatched a batch, you'd stop at nothing short of going to war just to claim them all.

Young Torbjorn Trofastsonn comes from the clan that makes them. He's a Viking through and through – he's thirteen winters old, larger than most respectable rocks, and most of all, a Buttersmith.

That's what he thinks anyway, until a charismatic merchant makes Torbjorn question his place among the muffin-makers. When Torbjorn lets the secret of his clan's muffin recipe slip, he calls doom and destruction down upon his peaceful village and forces his brother Storfjell and his clansmen to do the one thing they are ill-prepared to do: battle for their lives.

is a spin off novella in the Evertaster series that tells the story of two Viking brothers and their adventurous past.

The Evertaster series (Book #1 released June 14, 2012) is about Guster Johnsonville, who goes searching for a legendary taste rumored to be the most delicious in all of history. Along the way he meets a slew of mysterious characters, including two Viking brothers Torbjorn and Storfjell. The Buttersmiths' Gold is their story. 124 pages. By Adam Glendon Sidwell. Published by Future House Publishing.

A legendary taste. Sought after for centuries. Shrouded in secrecy.
When 11-year-old Guster Johnsonville rejects his mother’s casserole for the umpteenth time, she takes him into the city of New Orleans to find him something to eat. There, in a dark, abandoned corner of the city they meet a dying pastry maker. In his last breath he entrusts them with a secret: an ancient recipe that makes the most delicious taste the world will ever know — a taste that will change the fate of humanity forever.

Forced to flee by a cult of murderous chefs, the Johnsonvilles embark on a perilous journey to ancient ruins, faraway jungles and forgotten caves. Along the way they discover the truth: Guster is an Evertaster — a kid so picky that nothing but the legendary taste itself will save him from starvation. With the sinister chefs hot on Guster’s heels and the chefs’ reign of terror spreading, Guster and his family must find the legendary taste before it’s too late. 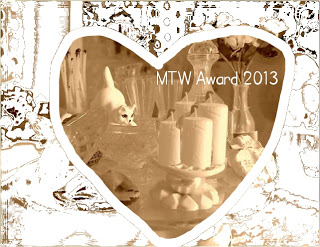 A nice surprise! Candid Canine was named one of the 25 favorite blogs that help bring visitors to  the Mini Treasures Wiki, a great resource site. Tons of mini links and things to find there.


(I've deleted many of the stories so I can use them elsewhere... but here is one to read:)

Minute by minute the essence of who he was grew weaker as the zombie poisons made their way into his bloodstream and attacked every living cell.

In those last few moments before the world, and life as he knew it, disappeared behind the milky white film forming over his eyes, he took one last longing look around him.

As darkness fell, he gave a final, sad cry. The phone dropped from his hand, pulling with it one of his rotting fingers, both shattering like broken dreams on the blood-spattered sidewalk.

*** Why the weird stories, why zombies, you ask? Well, it begins with my book, GIRL Z: My Life as a Teenage Zombie, coming in August...