HS #Minis Swap, Off to Shows! 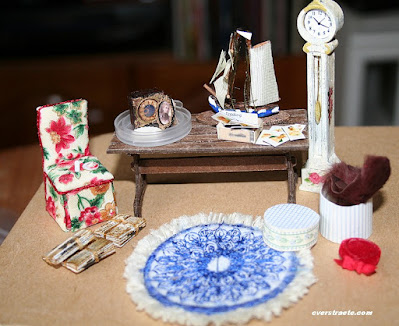 Yay! I'll be off to the annual Dollhouse Shows in Illinois tomorrow! (Bishop International and The Spring Showcase) I'll try to get photos of displays, etc. and show some of the things I find.

So...in the meantime, figured I'd show the fun items I got in the annual Half Scale Group Swap a few weeks ago. (Click photos for full size.)

Look forward to this every year. Been doing it for years and never disappointed!

The theme this year was Antiques. It's a starting point, but you don't have to stick with the theme. 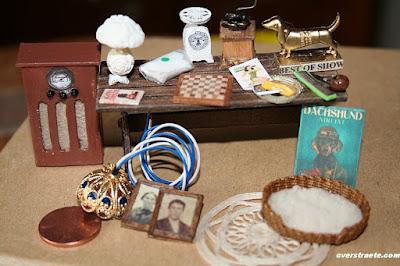 Fun stuff! I made the award and dog picture. (The little white package are the checkers; not opening that until I glue them down!)

I made art and the trophies. The statues could be smaller but it's what I found to work with... Trophies, of course, are all sizes... 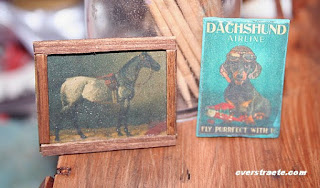 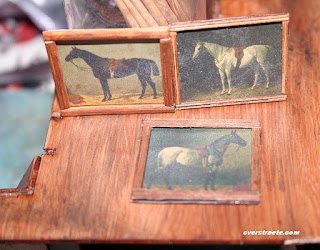 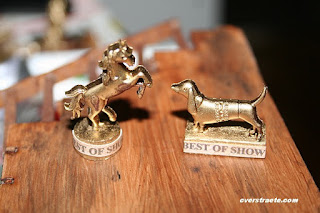 This was pretty cool. Love this hat and stole set! Maybe I'll make a small stand to hold them. 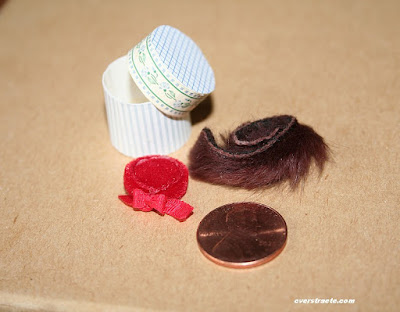 See you when I get back from the shows!

These have been staying up online so I'll post the link:

The latest Episode 5 (and the first 4 episodes) of the UK minis show, The Great Big Tiny Design Challenge, are (so far) still viewable online.  See link. to catch up. 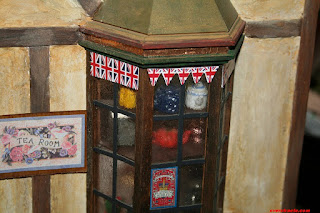 While I'm working on the Fairfield (yes! I have papers cut and ready to go in; paper and trim for the fireplace and I can add some lights! But... the problem with this house (so many!) is all the planning. Do one thing, realize have to do something else first. It gets tiring. Why I start and then get nothing else gets done. More on that later. Sigh.)
Moving on... I added some new things to both the Tudor Tea Shoppe and the Haunted Toy Store, so thought I'd do a combined post. (Click titles for last posts or look in left column archives. Click photos for full size.)
The Haunted Toy Store
Never say never. I saw mentions online of people finding the Disney Mini Toy Brands, which got me curious. Well, since I came across some at Meijer, I bought one. (But!!! I see some people sharing a mini Dumbo! Oh, I love Dumbo so I keep searching as I don't want to pay $12 for one mini figure.) 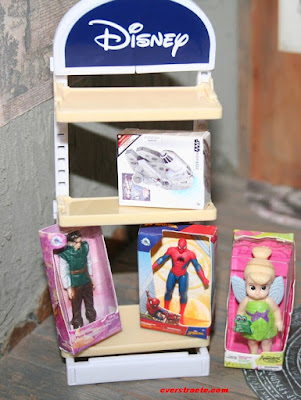 Anyway....pretty cute. This one also came with a small shelving unit to assemble. Interesting is they also now have Mini Fashions Brands with purses and shoes (but Barbie sized.) Cute, but I'm not going to start on those (though I could set those up in the Mego Cher doll dressing room I have which is put away... I better not think of that! Running out of display room!)
I know a few of the items are larger, but in comparison, they work as toys for the Living Dead girl doll. I can also change her out to a creepier doll, too, but she seems to fit in here. 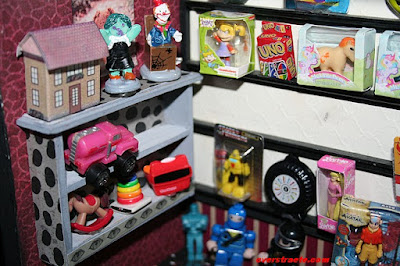 I also added some of the Lemax haunted toys I got last year  to the wall shelf.  I'd bought two packages then as I thought they were cute and I've learned - they never reissue the same items though they did have new mini gnomes again this past Halloween that were slightly different than last time.
I also added a Big Bird I found at Petco. It's getting full now like a toy store should be, with lots to look at. Glad I changed this project as these are fun things to look for. (Hey, I still have some wall shelf space I can fill!) 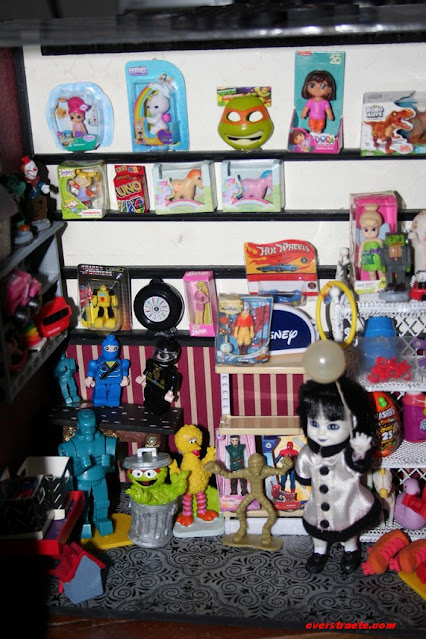 * * *
The British Tudor Tea Shoppe
Happy Birthday to Queen Elizabeth, who just turned 96 and is celebrating 70 years as monarch!
I probably made this project some 20 years ago, but looking at it again, I realized my big oversight - no Union Jack teapot! Gasp! Well, when someone online shared a photo of a set they'd seen (Timelines brand) at Hobby Lobby that I'd never seen there before, of course I had to find one! Naturally they were out of them at sale time, but I went back again and found that plus this pretty set of pitchers for flowers and a nice silver tea set. I'll save those for other projects. (Funny that I went back again and the sale was back on so I got another British teapot set, this time at half price!) 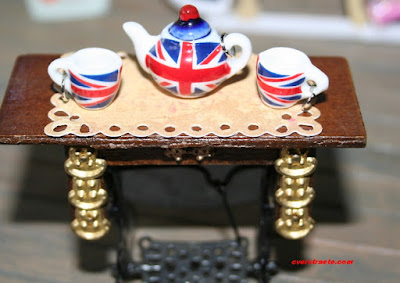 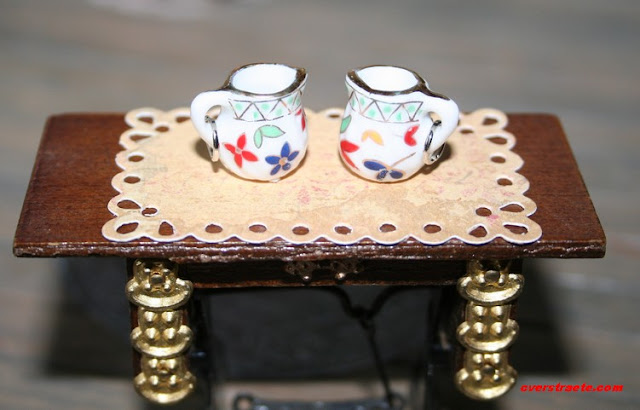 The Union Jack tea set really adds something to the bottom shelf here, don't you think? (The blue book is a Dateman miniature photo book from the UK.) 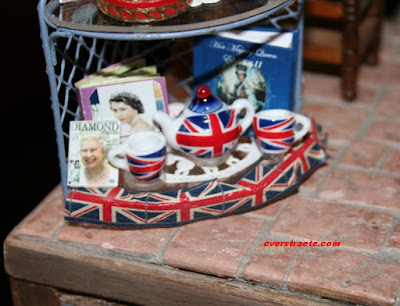 I also decided to add some flag bunting and a small Jubilee sign outside, plus some more flowers. It thought it looked kind of bare before. It needed a few pops of color, right? This project probably sat for 10 years or so, so it needed updating. I added the new newspapers, too, and the Queen and Prince Philip portrait inside. 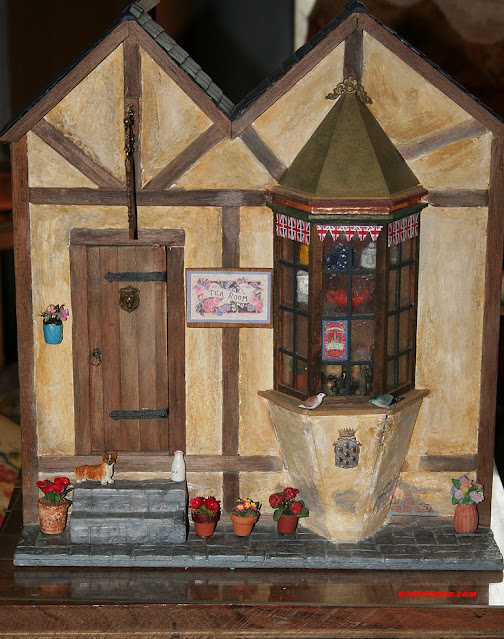 Some other additions include these really nice handmade pillows from a UK maker at Etsy (LadybirdandPenguin), so I had to add a couple. (And they were so reasonable, just under $2 each!) I think they really add a nice touch. 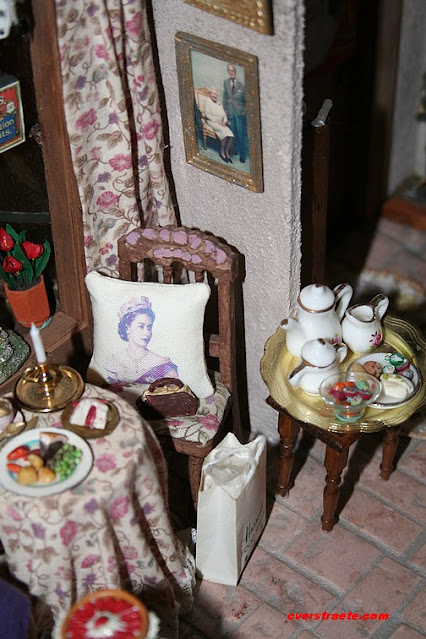 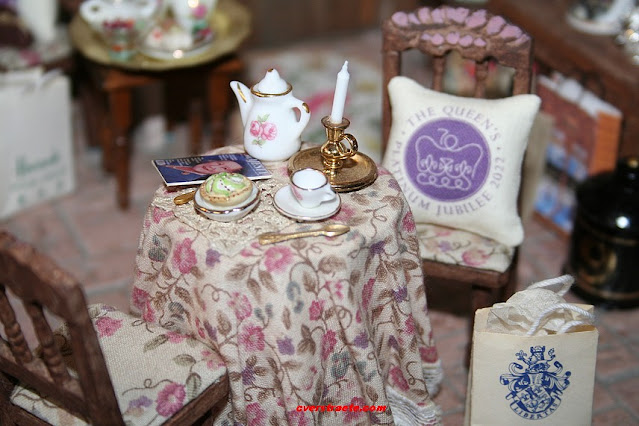 I also added the ceramic Jubilee sign (a button) and a thimble from Birchcroft China/Etsy, also in the UK.  I like adding things that are British made for authenticity. Even the food as that meal plate on the table (second picture above) and the large black tea container on the floor (partially shown at right below) were from a dollhouse shop in London when I went there years ago. The silver model below (and a toy dragon by the shelves) are from Westminster Abbey. The photos on the wall are from the trip, too.  I'm sure I'll keep adding a few new things, but I'm running out of room! 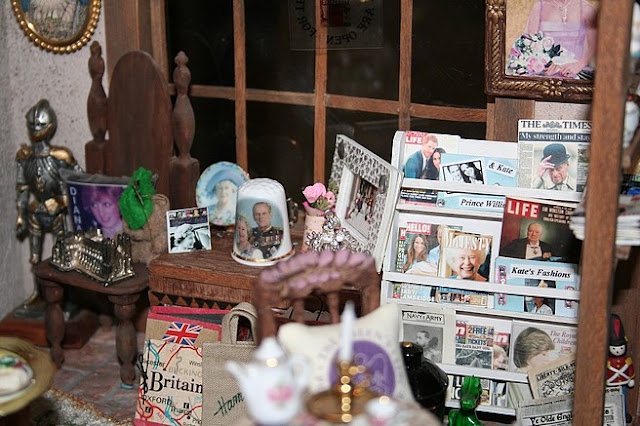 Thanks for stopping by again! Hope you enjoyed the tour! 😃
Stay tuned for more posts. And the dollhouse shows in Chicago (Tom Bishop International Show and the Spring Showcase show in Schaumburg, IL) are next weekend, so really looking forward to that! Will share photos of what I found and things I found interesting. 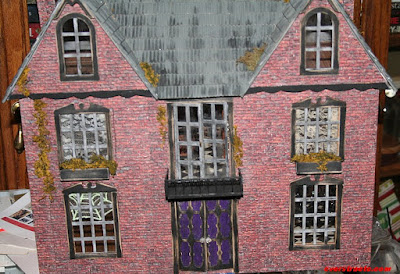 I was going to post this at the end of March, but time got away from me. Anyway, here's an update of a few thigs I got done since the last post. Yeah, I know, slow progress but...?
The roof is done (ghastly project) and I think it came out pretty well. Any goofs I covered with moss in strategic places...  ha! I got the fence from Alpha Stamps (I cut and used the smaller pieces on my other Greenfield haunted house) but I also got a bat border which I might use in front. Have to add those around the roof edges yet.
I put a vine on the side, too, for many reasons including that I lost the original top window piece and had to cut a new one which wasn't quite perfect. But I thought the vine added something.  I also made a section of ferns and wisteria blooms (purple floral soft/shredded foam glued to cloth wire) to add to the front yet. As you see the octopuses are not on yet, either. ha! 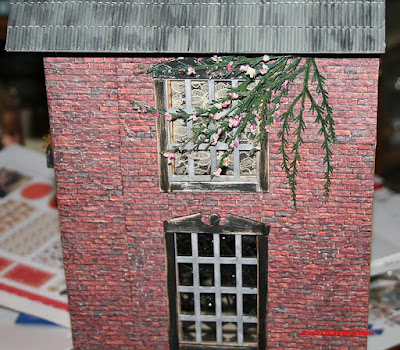 Also made a few flowerpots to put on that really too small for much else balcony in front. I'm thinking of making a new patio/outside front yard to put some statues and things, maybe some seating areas with gardens and shrub borders. Have to figure it out yet. The idea: I'd like to add a semi-formal eerie garden with animal topiaries (like in The Shining) could be cool. I found a couple small plastic toy animals I saved to cover in green grass (that's why you have all this weird stuff!) Stay tuned!
The fun part: some inside stuff: 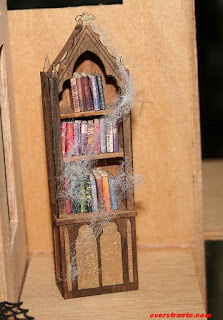 The gothic bookcases turn out to be too tall for the second floor since I didn't want to cut off the front cross. So I shaved it down a bit and decided to use the single one on the first floor. I'll use the double set in the Fairfield (which I checked and since the second floor where I want to use is only 4 1/2" tall (the first floor is 5" tall) I'll probably cut the top crosses and re-glue them. (from SDK Miniatures.)
The small bench is a southwest style piece from Annie. This was fun: once I saw this spiderweb table set at a show some time ago from Michelle's Miniatures, I knew the quarter-scale table would work as a half scale side table. (Oh I see she has a cool spooky face Adirondack chair in half scale that would be fun to get!) 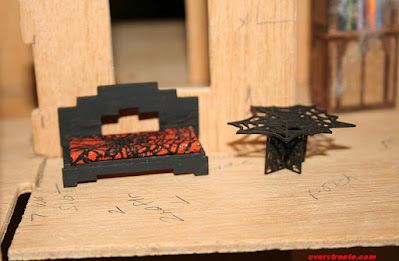 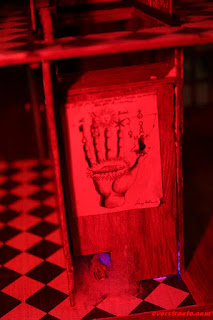 * The 'I Thought of It, So Now I Have to Do It' Idea:
Once I thought of that light under the stairs, well, I knew it would bug me unless I tried something. (The photo is red as I covered the flash to show the blue light.)
Soooo...  The back wall here actually was pieced since I had changed the original staircase top tread and had to fit a new back. I filled it in with three pieces since I didn't think I'd be pulling it out again.
I decided to use the round piece with a switch from one of those cheap tea lights. I changed it so I had to solder a new blue LED light to the metal. Next, I measured a new full back using picture framing mat board, stained it (Gloss Mod Podge tinted with Brown Umber Acrylic Paint) and then cut out the hole. I glued the switch in with Quik Grip and then glued the picture back on over it, cutting out a small slot for the switch.
Ta-dah! It's all lightly glued so I can take it apart to change batteries and then re-glue when needed. It's more a novelty so I won't be lighting it that much though. Next time, (yes there'll be a next time if I plan it ahead!), I want to try using one of those blinking LED's. There are tea lights with those but I didn't have one handy.
That's it for the moment. I added a few things to the toy store and the Tea Shoppe, that's for another post. Even more fun: got some cool things in the annual half scale swap and the dollhouse shows are coming up at the end of the month. Be sure to come back for more photos!
Next? 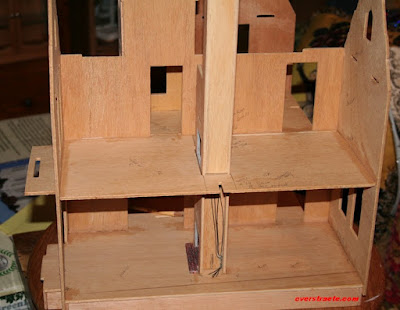 And.... yes.... I got the Fairfield out. Again. I'm determined and just don't want to quit on this yet. The two sides are glued. Realized I left one small wall part out that I can't fit in now so I'll have to cut it into two pieces for each floor. And next will have to wallpaper the inside of the tower to fit it in and put brick paper on the fireplaces. I studied and restudied those instructions, trying to ID pieces so it's (kinda) starting to make sense. Changing some things, of course. Will share again when I have some real progress.
Thanks again for stopping by!