Vote for Searching For A Starry Night Cover!

My cover is among those considered until April 4 for the Covey Cover Awards. Please vote for the cover of Searching For A Starry Night - #18 - at
http://thenewcoveycoverawards.blogspot.com/

The poll is on the left of the page. 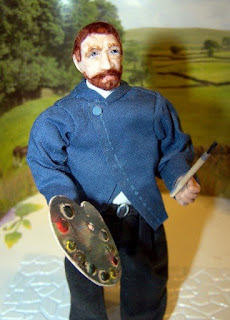 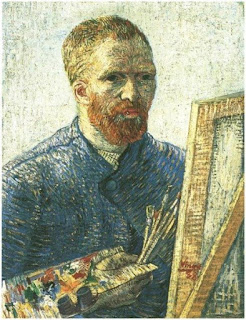 I finally received my miniature figure of Vincent Van Gogh made by dollmaker Bonnie Glazier! The 1" scale doll is about 6" tall (1/12th - 1 inch scale is 1"=1').

He is fashioned after the self-portrait Van Gogh completed in early 1888 in Paris, which is now at the Van Gogh Museum in Amsterdam. 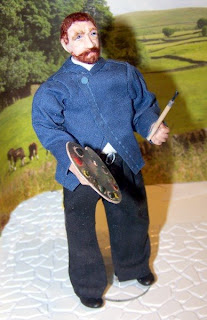 I think he looks like him, don't you? I was absolutely thrilled with the results!

I am going to make an attic studio scene featuring the Vincent Van Gogh figure and his paintings. I hope to display it at book events as a unique conversation piece. It seemed the perfect project to do since my book, SEARCHING FOR A STARRY NIGHT, focuses on the hunt for a missing miniature replica of Van Gogh's Starry Night.

I already have an easel. (Ok, I cheated; I decided it was something I didn't want to tackle, so I bought a nice wood one. Some things are best bought instead of made, at least by me. ha!) 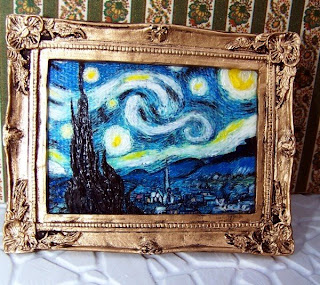 As described in an earlier post (see the 1/12 entry for details), I do have a fantastic miniature oil painting of Van Gogh's (The) Starry Night and his famous Sunflowers painting, done by miniaturist Lucie Winsky.

Another fantastic accessory is the great paint palette, brushes and paint supply set made by my Dutch friend, Kitty Balke. She, too, added some incredible details. 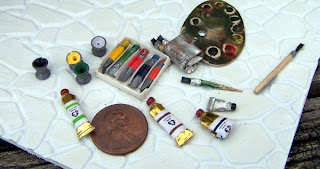 (Note: More of Kitty's work can be seen in the story I wrote on her, our miniature tea shops and our long-distance friendship, in DollsHouse and Miniature Scene Magazine, April '08, #166. She made most of the teapots in my Teapot Shoppe featured and also seen on my website, click Miniatures Gallery.

Usually I do make most of the things I put in my miniature scenes and houses, but with writing and as the book promotion tasks multiply, I knew I might not have time to do much. I thought it best to leave the doll dressing and painting to the experts. (The painting is something I have not mastered or tried and I have not dressed any male dolls yet; I started one, but the jacket is still unfinished.) The paint supplies were a much appreciated surprise gift.

I will post soon on the progress of the miniature art studio, so check back!

I'd love to hear your comments!

5 comments:
Email ThisBlogThis!Share to TwitterShare to FacebookShare to Pinterest

Author Interview: Patricia Guthrie - "In the Arms of the Enemy" 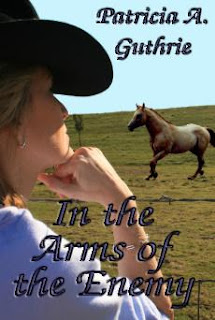 This week we have a treat - the first of an occasional series of author interviews.

Meet Patricia A. Guthrie, author of the just-released romantic-suspense novel, IN THE ARMS OF THE ENEMY, (Light Sword Publishing.)

Guthrie, a dog and horse lover from south suburban Illinois who's trained and showed her prized Collies, and has also broke and trained horses, sets her first novel in the field of horseracing. The premise is one that you see occasionally in the news - the death of a prized racehorse, insurance scams, and murder.

In IN THE ARMS OF THE ENEMY, horseman Adam Blakely goes undercover to find who killed a prize racehorse and horse trainer, only to fall in love with another trainer - and his prime suspect, Maggie McGregor. The pair uncovers an insidious insurance scam and must learn to trust each other before they are the ones exterminated.

Having horses as the theme of her first novel was natural for Guthrie, who's owned horses for about 25 years. It also was a way for her to bring attention to the dark side of the horse world. She dedicates the book "to those horses lost to man's inhumanity and greed, and to those humanitarians whose mission it is to save and protect them."

"I can't remember not having a horse," she says. "The seed for the novel was planted years ago when a scandal broke out in the horse show world about some sleazy characters killing show horses for insurance money. Since then, I've heard stories about racehorses receiving the same treatment. I had to write about it."

In the book, horse lovers will meet: Black Autumn, a 3-year-old thoroughbred, and candidate for the Kentucky Derby. He and his trainer are found murdered. Playboy, a bay quarter horse gelding about 20, who'd been used as a track pony until he was abandoned and rescued by the heroine; and Black Autumn's sister Bluebird, a 4-year-old thoroughbred mare who belongs to the hero. There are other horses, too, although they don't play a prominent part in the story, Guthrie says.

While Guthrie is now a full-time writer, her own background can serve as creative fodder for dozens of stories. She studied music in New York, sang opera for many years here and abroad, and was soloist in a prominent cathedral. She was a music therapist and taught music for the Chicago Public Schools. 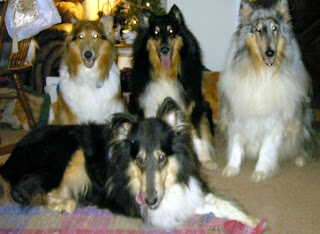 Guthrie enjoys weaving new tales, with several books already completed. Animal lovers will be glad to know that she's continuing her trend of including a special animal in her books. Her next novel, "Waterlillies Over My Grave," will be out next spring and features an 8-year-old Collie named Lady who helps "sniff out" the bad guys.

"Strange. Jackson looks like Bluebird," she says. "Not intentional, I don't think."

First line, IN THE ARMS OF THE ENEMY - "It was a great day to catch a killer."

Favorite Scene: "I guess that would be the scene when Adam is lunging Bluebird pretending to be a beginner. When a motorcycle roars down the driveway and Bluebird spooks, Adam is forced to show his skills as a horseman, letting Maggie know he's not what he pretends to be."

** Find out more about Patricia A. Guthrie at her blog and at MySpace. 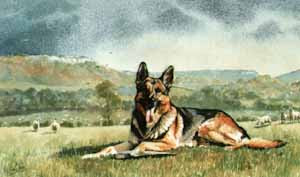 Today is memorable, according to This Day in History, for Uncle Sam calling up more troops in 1942 - dogs, that is.

On March 13, 1942, the U.S. Army launched its K-9 Corps As part of its new War Dog Program, the Army began training dogs, with over a million dogs serving on both sides during the war.

In World War I, dogs became valuable message carriers and companions. Famous war dog Rin Tin Tin, an abandoned puppy discovered in France in 1918 and brought to the US, made his film debut in "The Man from Hell's River," a silent film released in 1922.