Well, I know my visitors here will understand... 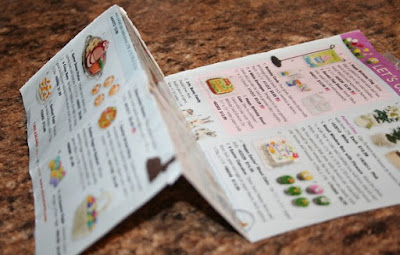 I just got the new Spring Miniatures catalog in the mail. Yeah, the whole back page. What happened to the rest of it????

*NOTE: Yes, they nicely sent me a replacement - in an envelope this time. ha! They said it had been happening quite a bit lately. Hmmm.... 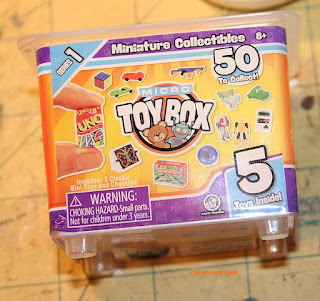 (Note: See the updated Not so Haunted Toy Store I put these in...)

I've seen people sharing these but wasn't sure on the size. (And I didn't want to start another collection. ha!) Well.... saw a display at the bookstore and once I saw the teensy play phone (remember those?) that decided me! Supposedly Target also carries these though I haven't checked. The ones I found were $7.99 a package. You get five toys. Supposedly there also are sets of Disney toys in the other brand that comes in the ball container. 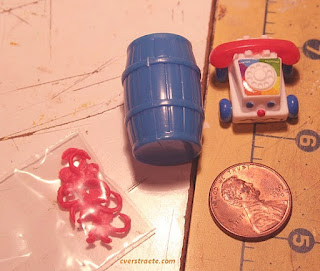 Isn't that the cutest thing ever??? And the Monkeys in a Barrel (barrel doesn't open) with teensy monkeys!!!

The other ones are pretty neat too to put on a toy shelf.  They also show one of those push popcorn poppers on the chart. That looks pretty cool, too, but probably hard to find. 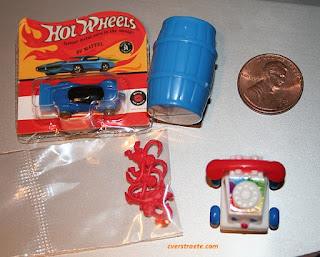 The My Little Pony in the box is just over an 1" wide. The Lincoln Logs are also just over 1" high. (Non-opening) I also got the Matchbox round tire car container (doesn't open) and a couple other toys. These are fun!!

So I guess it looks like I'm gonna take that front opening shop I have that isn't very deep and rework it. I was going to make a haunted bookstore, but I've got other bookshelves and kits to do that. I just have to change the prints and colors, and see how to get a clasp/lock on it. 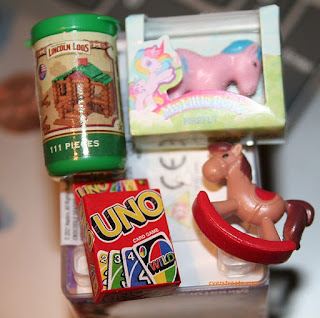 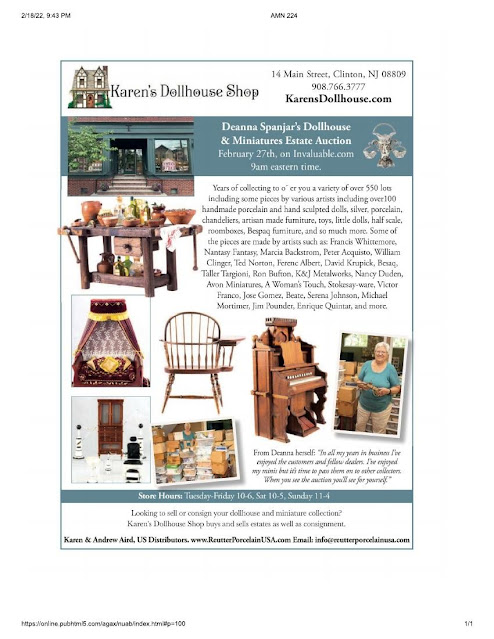 Deanna Spanjar, former dollhouse shop owner in Wisconsin, is auctioning her collection and inventory via Karen's Dollhouse Shop. You can register here. The auction is open Feb.27 with over 500 lots. ** Liked this one and still hope to see it!

There is a different show:

** UPDATE 2/20: Someone on FB said they're watching on Discovery Plus, (** seems to not be on STILL in US. Going to ask company when/where it'll air here.) but it's only up to episode 4. New episodes air weekly on Fridays. The creator's site has 10 episodes listed. (So I'll probably sign up later once it's near the end and enough are up. It also has a 7 day free trial and is $4.99 per month.)

** *** WAAAAAH! Apparently whoever was loading the videos online didn't have the company's permission. So they've all been taken down! Well, I hope this company schedules the shows online very soon!!! I only got to see the first three!!

Hope they schedule in the US soon!

** And wow! I watched the first one and this is really great! The designs are fantastic! Can't wait to watch part 2 and to see the whole show!! 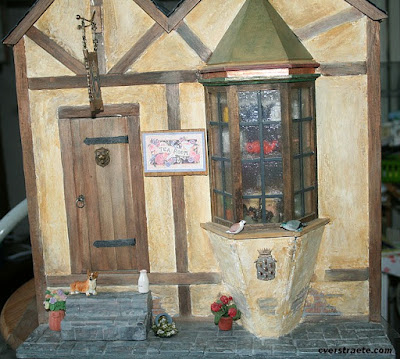 In honor of Queen Elizabeth's Platinum Jubilee, I decided to do a little updating on my Tudor Tea Shoppe. (There are a few past photos and an overall back interior photo here.)

I made this project over 20+ years ago, adapting it around an already partially built Houseworks porch. I'll have to take pix of the sides, all brick and stucco. I made the front and the door, too. The back is open with shelves and the sides are part-walls. If I did anything different now, I would've used the lightweight Spackle as it doesn't crack as much. (Click photos for full size.)

Haven't pulled it out in a long time as the case is very heavy and I had it buried on the shelf. So moved a few roomboxes around and put it in the other cabinet for now, unless I decide to move it again.

I didn't change much, just added some things and moved others around.  I added some flowers above and a planter on the front wall. Still may change the fake planter on the left. And gotta have a Corgi, too!  * I'm still thinking of adding the perfect element - a decorated hat! 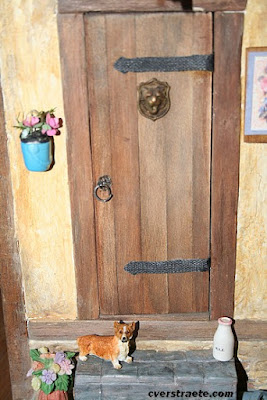 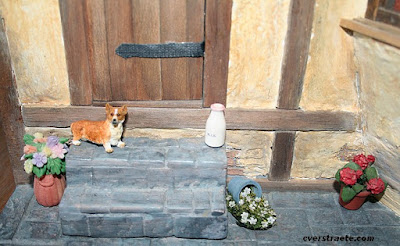 Here's the front sign, made with wood pieces, and hooked together chains with Tiny Turnings on the sides. 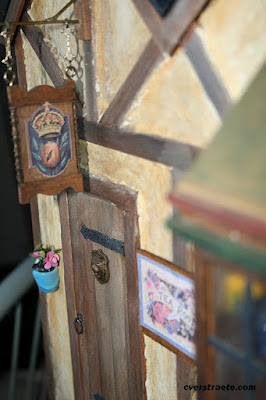 Added a Queen and Prince Philip portrait photo on the wall and a Queen Victoria at top (round frame not shown.) 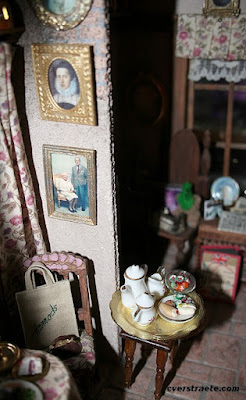 Put the large coronation picture on the interior back side of the door  here... Also added the royal plate. (I have an anniversary mini china plate/button and a thimble coming yet from England. Found them at Etsy.) Then if I have to move and uncover this again, I'll light it for better photos. (And I noticed I forgot to put a chair back in. ha!)

I moved everything over to add the magazine shelf kit from Dragonfly Intl. I moved the magazines around and added the paper dedicated to Prince Philip an put a couple of the mini albums in there. The large white framed photo is of Will and Kate's wedding. 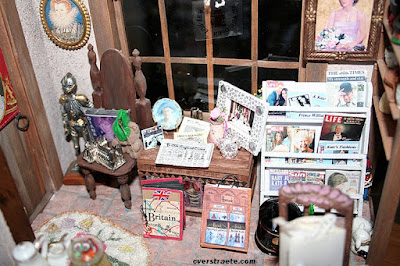 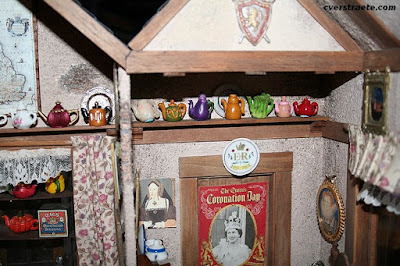 Added a couple things and moved items on the shelf. The blue anniversary book on the bottom is a Dateman photo book from the UK. I made the Diamond Anniversary album. 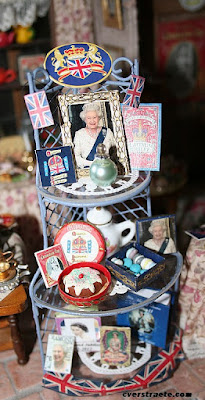 Here are a couple albums I made. The Britain album includes the photos I took when I went there some time back. Yeah, that's me in the phone booth. I think they took all those out now? Which is a real shame as they are cool! The other is another mini album I made of William and Kate. This type of album uses scrapbook paper for the cover and pages. I should update these and make a couple more albums with their kids, and Meghan and Harry's family. Maybe even a Prince Philip memoriam album. Well... eventually as I'll likely have to add others at some point. I did have an idea before to have a shelf with different albums on it. Yes, more ideas. ha! 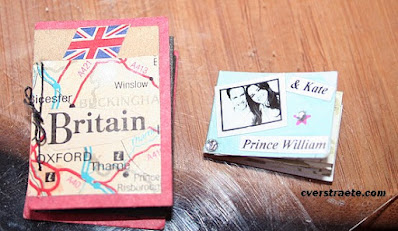 That's it for the moment. I'll update the photos once I get the other items and add them in.

Thanks for stopping by!