Had a great weekend going to all three miniatures shows in Schaumburg and Chicago!

As always, there was tons to see. I didn't take as many photos this time, but wanted to share a few things I did get pictures of. I'll also have some of the photos and information in the upcoming issue 63 of the AIM - Artisans in Miniature Magazine. (Click pix for large images.)

I always find some great deals at the Three Blind Mice show (http://3blindmiceshow.com/chicago_spring/) and this year was even better - I won a half scale (1/24th) dollhouse kit from the door prize raffle! Believe me, I was pretty shocked! 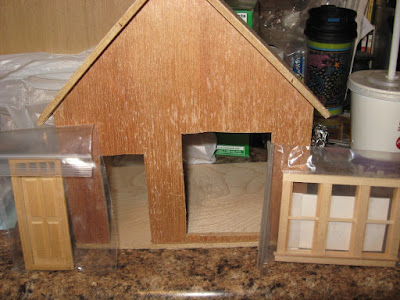 I always find a bunch of accessories here. The fun stuff I found was a mini silver garbage can (hard to come across those now and I have fun filling them!), some small half-scale end tables, flower boxes, tiny tables, plant hanger, cigar box, mini computer, shoes, etc. I got a kick out of this Pan statue, (at left) as it was definitely different (kind of creepy!) and will fit perfectly in the half-scale, haunted house garden once I do that project! I got an interesting sofa kit, too, that I may use in my upcoming record store project. (Yes, another new idea. ha!) 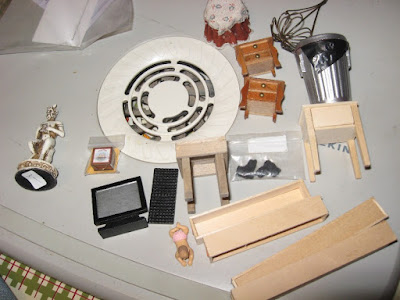 Now, not to inject politics, but these cut-out server figures cracked me up! Oh, the jokes I could make, but I'll control myself. ha! (From William Cambron Miniatures, Missouri.) 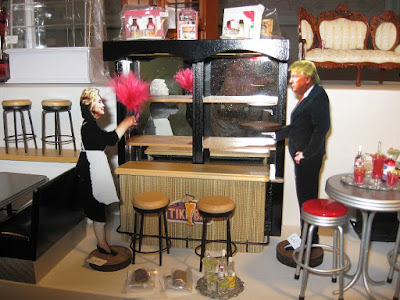 This was a pretty cool spooky house by April and Ron Gill of The Wildwood Dollhouse from Michigan, which will be going to The Museum of Miniature Houses in Carmel, Indiana. (http://museumofminiatures.org.) The interior features a full array of potions for that wizard or witch, along with a unique table on skeleton legs. (I hope it doesn’t walk away!) 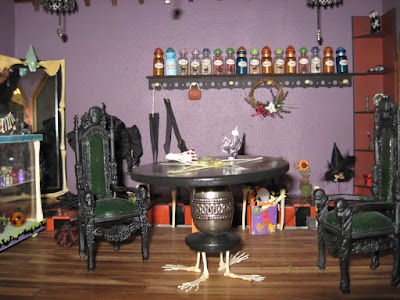 The newer dollhouse show, The Miniature Show, (http://theminiatureshow.com/) was even better in its second year with more vendors. Much of the items are high-end, but I found some great kits in three scales from first-timer Jane Harrop of the UK. I love finding new half-scale kits. She had some interesting vintage-style kits like the table and vegetable cart. And the filligree screen is also great. I really liked her assortment. 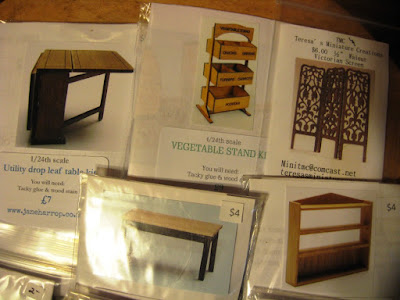 This incredible Steampunk scene in a giant top hat by Bette Jo Chudy was part of the displays for the show's artisan competition. 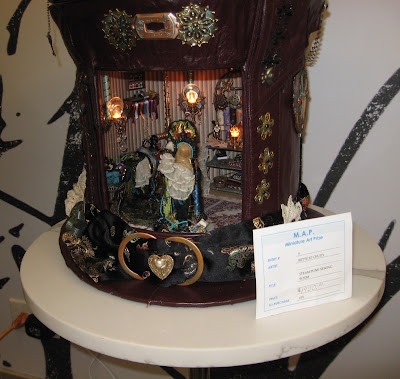 The Chicago International (Bishop show) (http://www.bishopshow.com/blank-chv5.) always has a ton of stuff to see, as well.

This was a cool idea using those plastic skellies. Will have to try something similar -chandelier from Magic-N-Miniatures of Ohio. (ignore the guy in the makeshift bathroom in the back.) ha! 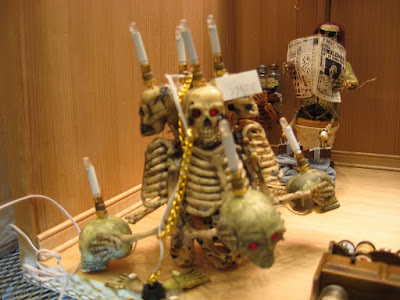 First-time exhibitor from the UK - These dolls from Bags of Character from the UK really do have a lot of character. Love the expressions! 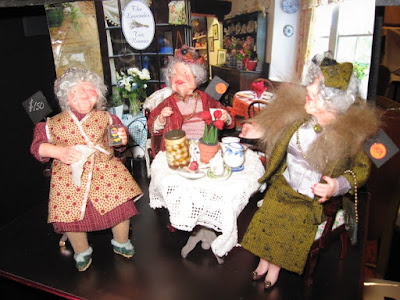 So, just a little taste of the shows!