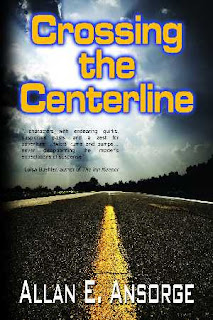 Welcome to Allan E. Ansorge, author of CROSSING THE CENTERLINE (Echelon Press, July '09), the first in a six-book mystery series set in Wisconsin.

Someone is trying to kill Carl Fletcher, and for the life of him he can't figure out why.

After what appeared to be a hit-and-run accident that cost the life of his fiancée, the full use of his right leg, and his career, Carl seeks a new life as a charter boat captain.

While he is out of town, another failed attempt is made on his life. His ex-partner in the Wisc. Sheriff's Dept. learns nothing is being done to find out who's hunting Carl, so he and Carl's internet-addicted, gun-toting mother, set out to find who wants Carl dead and hopefully stop them.

Excerpt from CROSSING THE CENTERLINE:

It wasn’t what Detective Michael McCaffery heard that woke him, but rather what he didn’t. Something familiar was gone. He had been living on this boat for three weeks now. The groans of the lines, the squeaks of the dock bumpers, and thumps of the hull had given him many sleepless nights. By now he was used to all he should have been hearing and wasn’t.

He lay in the queen-size bunk in the aft cabin and tried to figure out what had changed. Mike really didn’t want to brave the dew before the sun was high enough to drive the chill from the air. There was something wrong, though; he could feel it.

Mike was a transplant from New York’s Hells Kitchen, a true Irish copper. He claimed to be what his grandfather called Black Irish, which prompted most people to think he was Italian. Whatever his inherited traits were, they did not include a love of the sea. He never cared much for water of any sort, especially if it wasn’t in a glass and couldn’t be called a chaser. But when a friend asks you to keep an eye on the one thing left in his world he truly loves, you compromise.

For the last month someone had been vandalizing boats in marinas up and down the Lake Michigan shoreline from Port Washington to Kenosha. The timing couldn’t have been worse for Mike’s friend Carl to leave his boat unattended for a month.