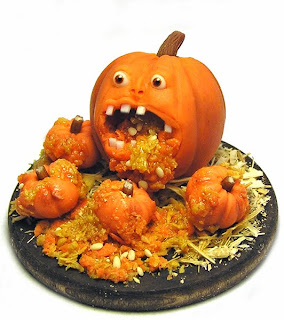 Welcome to Day 10 of The 12 Days of Halloween in Miniature. (Link will take you to day 1.)

Well, we've met some guests, seen some decorations, so I guess it's time to splurge again.

We've got some yummy new Halloween treats to offer today so get a plate and dig in! (Well forget that angry-looking pumpkin at left. Yikes!) Pictured: Birthing Pumpkin 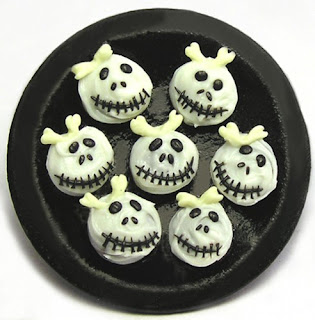 "It all started when I began collecting unusual dolls," she says. "That led led to accessories, then I had my mom make me two dollhouses." 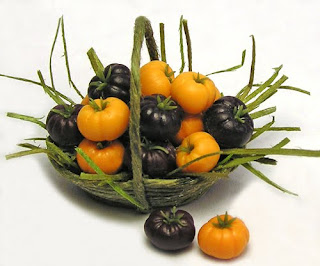 Food (in miniature) became her downfall. (Isn't that always the way? ha!) 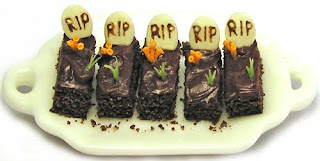 She says, "when I discovered miniature food, I became completely obsessed! I never knew that such an art existed, and I started collecting pieces.
Pictured: Graveyard Brownies

"In time, I thought I would try my hand at making some, so I went to a craft store and bought just two blocks of clay, brown and white. I made a plate of breakfast, and since I only had two colors, I improvised by painting everything! From there, I did some research, bought some books, did a lot of experimenting, and threw myself into it non-stop." 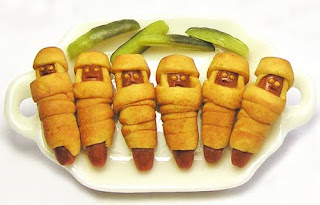 She now makes a wide range of foods from the whimsical, sometimes humorous and slightly scary, to historical dishes and foods so realistic they will make your mouth water.
Pictured: Mummy Dogs

Even with the variety of her miniature menu, one of her favorite items to replicate is fish.

"I've always had a fondness for making seafood, particularly fresh fish, maybe because it's one of my favorite things to eat, too," she says. "I love checking out the displays of fresh seafood here in Hawaii and getting ideas of what to make." 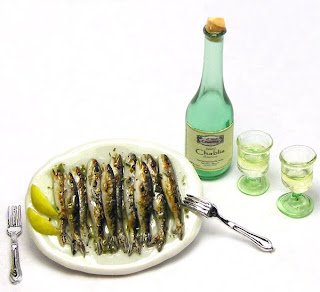 Even if you don't like fish, the texture almost makes you want to get out a fork, doesn't it? 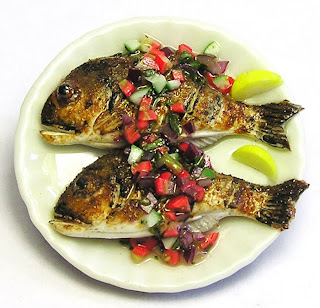 If she had to pick one thing to make again and again, Kiva says it would probably be fruit: "The easiest thing for me to make is probably fruit. I've so much of it over the years that I could probably make most of them with a blindfold on."

But there is an exception: "Making a really good, realistic pineapple is difficult. I am asked to make them a lot, because I live in Hawaii!" 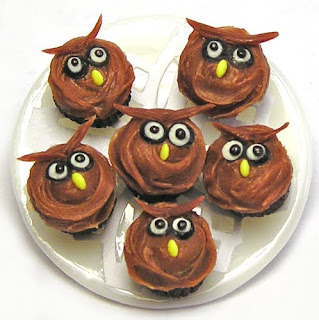