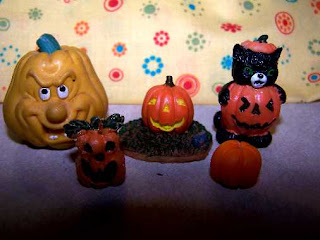 Welcome to Day 7 of The 12 Days of Halloween in Miniature. (Link will take you to day one if you're checking in late.)

I've still got pumpkins on the brain, especially once I read these pumpkin songs at this teacher website. (I didn't know pumpkin songs existed either. Beware the Little Teapot/Little Pumpkin song. You've been warned!)

Thought I'd share an assortment of Halloween items today like this group of different sized pumpkins shown above.

Many visitors who don't collect may not know that there are several scales smaller than the 1 inch scale items I've been showing. It goes down in increments to 144th scale (dollhouse for a dollhouse) size and even smaller micro minis.

I like half scale (1/24th scale) which is roughly sized down in half from 1" scale. I've been collecting things to design a couple rooms in a Gothic clock case I bought at a garage sale for $3. 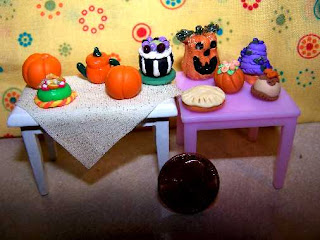 Here're a few cute Halloween and seasonal cakes of polymer clay made by my friend Kitty. See her blog, Kitty's Minis.

(That's a penny in front to give you an idea of how tiny these are.) 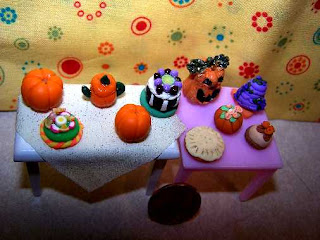 This draped table is from a past half scale group swap. 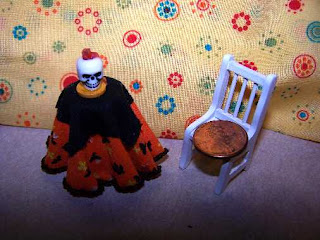 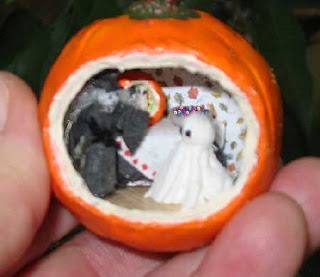 Even smaller is this charming scene in a pumpkin, what Canadian Chris Shibata calls her "Pumpkin Party."

While the pumpkin itself, which she made of FIMO polymer clay and hollowed out on the inside is 1 1/8" tall in 1" scale, the interior figures are roughly 144th scale.

Holy cow! Though it's hard to see (best photo she had) there is an even tinier pumpkin inside on the table that has the same scene in it!

I bet even Peter Pumpkin Eater would be amazed!

** To give you an idea of size, here is a free half scale couch and chair pattern to try. (It is in Dutch but simply cut and upholster.)