Halloween in Miniature 8: What a Character! 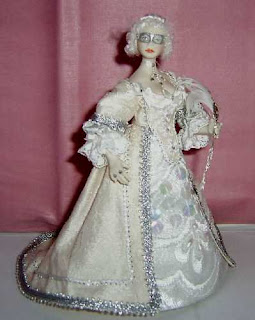 Welcome to Day 8 of The 12 Days of Halloween in Miniature. (Link will take you to day one if you're checking in late.)

The best part of a Halloween party is seeing what costumes the guests are wearing. Some people have amazing imaginations!

It's much the same in miniature. Doll makers come up with an incredible array of costumes that rival any in real life.

Louise Goldsborough, who makes 1 inch - 1/12th scale dolls under the name Angelique Miniatures in England was thrilled to tell her "friends" about the party. Believe me, they caused quite a stir when they arrived.

There is a legend of the lovely "Spectre at the Masquerade" (pictured above), whose presence has been reported by several guests. (No, not the ones drinking the Golden Eye wine.)

According to eyewitness reports, "suddenly the temperature of the room dropped and all eyes were drawn to the hazy figure of a young woman standing in the corner. Her skin seemed strangely pale and her clothes were very fine but belonged to an era long ago. She seemed to shimmer in the gloom of the candlelight as she gazed wistfully at the revellers who stood gaping at her, open-mouthed in surprise. Then she gave a faint smile and faded away!"

If that wasn't enough to give visitors a fright, then "The Ghost of Anne Boleyn" would surely do the trick. Dressed in lavish brocade and sparkling trim, poor Anne still wanders, carrying her head in her hands. 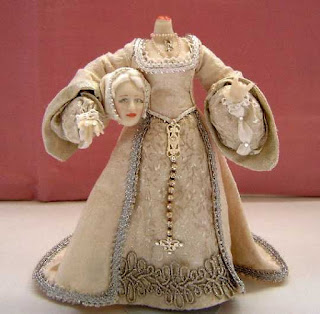 Connecticut miniaturist Anne Larson has been making dolls for about 20 years. She began by assembling painted and wigged kits. She now starts with porcelain blanks so she can make the doll completely herself from the assembling and painting, to the wigging and dressing. She also enjoys doing character sculpting such as the winged monkey and the hawk sculpture in her Wizard of Oz scene. 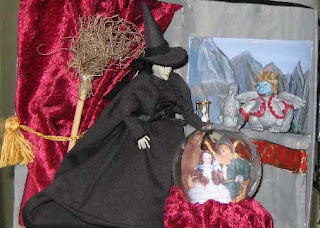 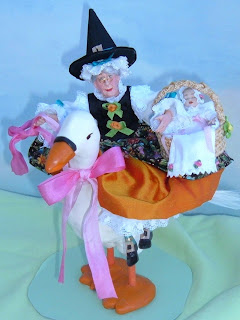 Well, look who's arrived! It's Mother Goose! This figure was made from a Marcia Backstrom doll kit (resin made from her original sculpt; the face is molded), also dressed by Anne Larson.

Anne found the doll kit on clearance at her local miniature store. She says the kit "had been hanging around for years. I think if you don't make dolls, it's hard to see the potential in a doll kit, so that's why she never sold." But Anne knew what to do! (Good idea, too!) 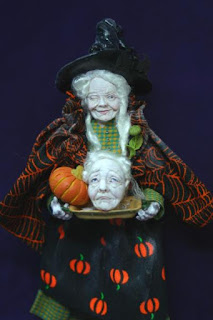 Backstom, a Pennsylvania artist and IGMA Artisan (International Guild of Miniature Artisans) also creates fully hand-sculpted 1" scale figures in polymer clay. Her witches, ghosts and older people are amazing. This one called the Headhunter Witch was recently on Ebay with a starting price of $350. Her work is featured in museums worldwide.