First Graphs: Too Rich & Too Thin: Not An Autiobiography, a mystery by Barbara DeShong 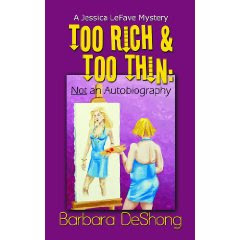 Prepare for big laughs in this Texas-sized mystery by psychologist Barbara DeShong.

In TOO RICH AND TOO THIN: Not an Autobiography, (Echelon Press, Oct. '09), Psychologist Jessica LeFave isn't your average shrink. When she's summoned to profile the killer who drove a spike through the heart of the notorious Bernice Jackson, Jessica is more than a little excited.

Not because Bernice Jackson is dead, but because Bernice, who'd soared to fame and wealth by shamelessly re-writing treasured historical events into wildly successful soft-porn novels and movies, was a psychiatry patient of her husband's at the time of his death.

She's convinced her husband was murdered to keep a secret revealed in therapy buried. Now she's trying to prove she's right as she uncovers clues in a family stranger than any Hollywood script.

Excerpt from TOO RICH AND TOO THIN, Not an Autobiography:

Here's the truth about psychologists:

We endure all those years of school-the killer exams, even graveyard shifts interviewing God-talkers and mothers who drown their babies-because we want to help people, of course. But that's not the brass ring. The top prize, once we're stamped and certified, is that we dan draw a line in the sand. Crazies on one side; psychologists on the other.

Well, that's not how it worked out. At least not for me.

My name is Jessica Rose LeFave, Ph.D., P.C., and I could not breathe.

I was parked on the curb at 44 War Admiral Run at the Flower Mound Country Club, staring up at the ugliest mansion on the planet.