Halloween in Miniature 4: Which Witch is It? 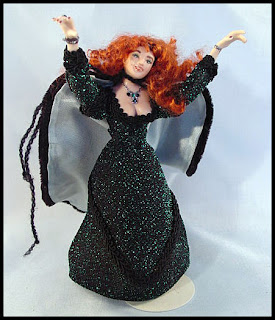 Welcome back! I hope you'll mingle and meet some of the guests. Be sure to get a drink - you can check in here.

Well, looks like the party is rocking. You know how there's always one guest at every party who loves to be the center of attention?

Our lovely red-haired witch might have had a teensy too much Golden Eye wine. (Told you it had a kick!) This fiery beauty is by Gina Gagnon of Lone Wolf Mini Creations,

Gina, who's been making miniature dolls since 1987, says she loves "the freedom to make what I see in my head and heart!" Her dolls always show her great imagination! 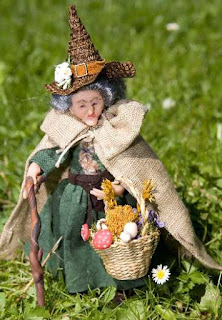 Oh, look! Why, it's Imelda! She and her friends flew in all the way from Austria for the party.

She even brought in her own special mushrooms to share with the other witches. Isn't that sweet of her?

(She's sure lucky! Flying in at that altitude, she bypassed customs officials who surely would've confiscated her plants and goods!) 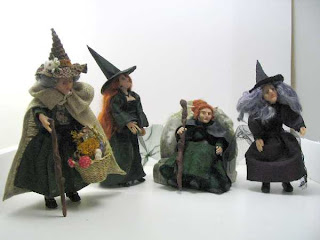 This adorable group (who says witches are ugly?) is by dollmaker Karin Bohusch of Austria. Karin, who has been collecting miniatures for only three years, began sculpting her own dolls in Oct. 2008. She will be selling her dolls at the Minimenta miniatures fair in Rothenburg ob der Tauber, Germany in November. It is her first time as a seller. See more of her photos.

"I started sculpting because a friend asked me if we can try to sculpt dolls," she says. "She needed some special dolls for her dollshouse so we bought some polymer clay and tried it. She gave up after one afternoon and I was addicted."

Our next guest, Baba Yaga hails from Russia. Her name means Russian Witch. Okay, we won't say that she is anywhere near pretty, but she has a charm all her own. (Don't say that to her face! She may hex you!) 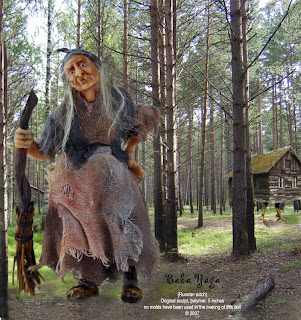 The old crone is hand-scuplted of polymer clay by Russian doll maker and International Guild of Miniature Artisans - IGMA Artisan Anna Hardman. Anna, who is also a middle school teacher in Ohio, creates amazing dolls full of character and beauty!

Oh, will you look at the time! Some of the guests are leaving. Something about a meeting in the woods. Better say a quick goodbye. 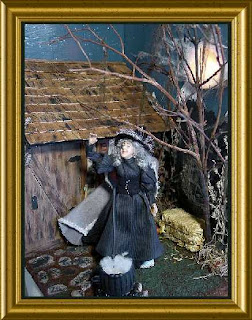 Glynnis (also from Gina Gagnon) hurried outside to wave farewell to her friend taking off on her broom.

"Helen," she called out, "you forgot your underwear!" (Gina shared that joke last year but it's worth repeating! ha-ha!) 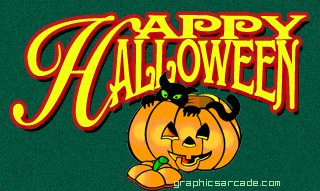 ** Interesting story. Pardon sought for executed witches in the UK.