Construction and decorating is moving along on the Serendipity shed project remake!

Last post #23,  we showed a bit of what was going on. Now, everyone we know is being rather hush-hush at this point as the contest deadline nears, so yes, we're keeping the full building a secret yet, too.

Painting and touching up is nearly done. Fences are being installed, along with other special touches.

But.... remember at the start waaay back in March when we talked about the theme? (See post 1.) The theme was inspired partly by the books, The Paris Key and Letters from Paris, both written by Juliet Blackwell. And...  Gigi stuck with the theme.

She previously showed part of the building front before so this is just a hint. 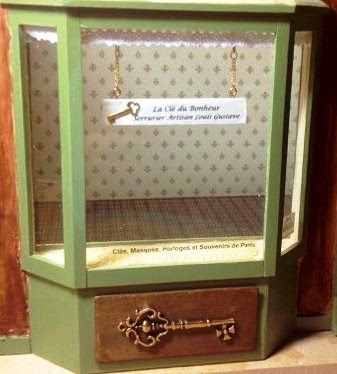 The store is called The Key to Happiness, La Clé du Bonheur, based on a real locksmith shop in Paris run by fictional Locksmith Artisan (distinguished tradesman) Louis Gustave.

That's the fun of a miniature project. Adding the special touches and pieces of history and research help in making it real and tie everything together.

More to come. The deadline is Dec. 17!  Thanks for reading and Happy Creating!--Gigi

PS--- Look for 12 Days of Christmas in Miniature - Coming Soon here on the blog, mid-month! -- Chris