Searching For A Starry Night Goes to the 4th Grade! 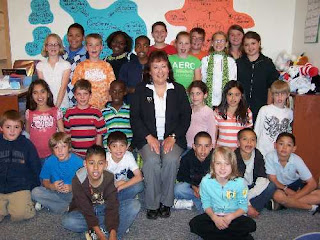 Cara Gorr, the 4th grade teacher at Nash Elementary School in Kenosha, WI, graciously chose Searching For A Starry Night, A Miniature Art Mystery for a three-week reading project in her class.

Mrs. Gorr and her students have been reading one to two chapters each day for their reading time. They also discuss what they've read and do writing exercises designed to meet certain educational requirements such as making connections with what they're reading, comprehension, visualization, etc. 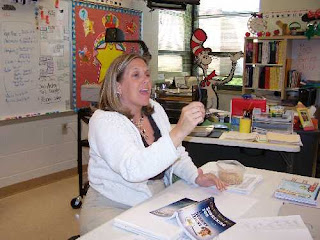 (Mrs. Gorr holds up a hook fashioned by a blacksmith at Old World Wisconsin.)

It was interesting to see how a word or topic led to other topics. So, Grandpa Sylvester's letter and inventory list (in the book) dug up by Petey led to a past discussion on jobs unchanged by the Industrial Revolution (horseshoes still being made by hand) and the modern name, a ferrier.

I stopped in to say hello to the class last week (as a visitor) and went for a full visit yesterday. Mrs. Gorr had wanted to surprise the kids so we kept my identity as the author secret until yesterday's visit. What fun! As the majority of kids had never met an author before, many were surprised at our surprise.

The fun was hearing the kids' questions about the book and about being a writer. They had some great questions, such as:

* Were Sam and Lita (my Searching For A Starry Night characters) real (and based on anyone real?) (That led to a few comments on inspiration, using real people as characters, and the possibility of being sued.)

* What inspired the story? Why was Mrs. Drake (the housekeeper and an important character) so mean?

* Did I have a dog like Petey? What kind of car I had? How much money I made? (Which led to a few comments on talking about royalties, advances, and how most writers are not rich unless they are ultra-famous and sold many books like Stephen King or get a big break, like Charlaine Harris's vampire mysteries being filmed and airing on HBO as the True Blood series. And I mentioned, many (most?) writers do have other jobs.) 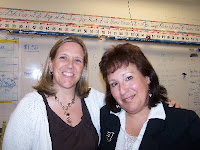 It was a fun 1 1/2 hour visit. They enjoyed seeing part of my collection of dollhouse miniatures (fast food this time), but the miniature Starry Night painting (just like in the book) was a big hit. Seeing is believing, and they were amazed at the detail in such a small painting. I also read a short you-solve-it mystery featuring my characters, Sam and Lita, and gave them a word search puzzle with words from the book (I'll be putting it up soon at my website.) 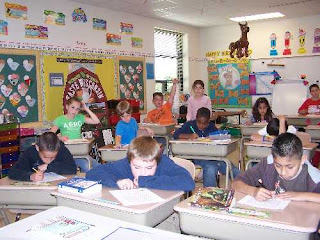 Next week, the kids will finish reading the book, so it'll be interesting to see what they think, and if they solve the mystery of who stole the miniature Starry Night painting!

I'll share some of their writing and some of their art in coming posts. (They made their own small versions of Van Gogh's Starry Night in class, which were very creative!)