Today's writing tip comes from a dyslexic mother of four who once thought she'd never get published! Her first book, published by Silhouette in 1982, became the first romance reviewed by Publisher's Weekly.

Macomber says, "never allow a sentence to go longer than 23 words. Find a way to break it up." She calls this "simple, easy, and in some ways, profound."

Debbie Macomber, the author of BACK ON BLOSSOM STREET, SUSANNAH'S GARDEN, A GOOD YARN, THE SHOP ON BLOSSOM STREET, BETWEEN FRIENDS and the Cedar Cove series, is a leading author, with books regularly hitting #1 on bestseller lists and translated into 23 languages. 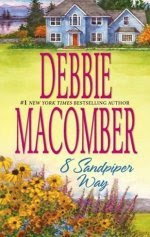 -- Debbie Macomber is author of several series and stand-alone books, including the popular Cedar Cover Series. In 8 Sandpiper Way, (Sept. 08), a wife find a strange earring in her husband's pocket, and begins to wonder…

Emily Flemming can think of only two explanations-an affair or sticky fingers-but neither sounds like the husband she knows and loves. Still, Pastor Dave did regularly visit the elderly woman whose jewelry has been turning up missing, and he does refuse to tell Emily where he's been when he comes home so late. He may be a good man, but he sure looks guilty-even to his wife.