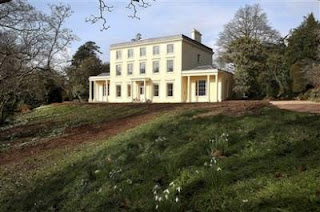 Both miniaturists and mystery writers will find inspiration over the pond with the opening on Feb. 28 of Agatha Christie's summer home, Greenway House, in Devon, Southwest England.

The house opens after a two-year restoration.

Now owned by the National Trust, the charming and "no-fuss Georgian," is where Christie spent her summers from 1938 to 1976. She didn't write here, though, and supposedly just concentrated on writing letters, relaxing, collecting, and entertaining. Some guests were supposedly entertained with readings from her books. The house is the setting in several of Christie's novels and the scene of a couple of her fictional murders. The house is restored to the 1950s and is much as the writer enjoyed it.

* Learn more, get visit details and watch a video here.