Love My Characters 2: Ghost Whisperer meets Connor from WHERE ARE YOU?

In day two of our Valentine's Day series, LOVE ME, LOVE MY CHARACTERS, Gus from Mary Cunningham's fun, time-travel story, THE CURSE OF THE BAYOU, book three in the CYNTHIA'S ATTIC series from QUAKE, turns Ghost Whisperer.

Twelve-year-old Gus talks with Connor, whose friend, Parker, is finding it hard to live with the guilt over his bff's death. Or maybe someone doesn't want him to live, either, in Alyssa Montgomery's spooky e-book, WHERE ARE YOU?

What secrets does Connor reveal to Gus about the accident and his new (after)life? See what they have to say at Mary's Cynthia's Attic blog. 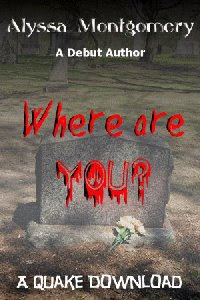 In Alyssa Montgomery's WHERE ARE YOU?, Parker Ryder’s best friend is dead. Everyone says the accident wasn’t his fault, but Parker can barely live with the guilt. Now, Parker is getting strange e-Mails. It seems that someone else doesn’t want Parker to live with the guilt … Or live at all!