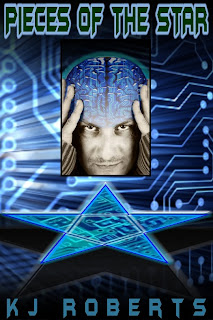 Today I welcome author KJ Roberts, author of PIECES OF THE STAR, a YA suspense/thriller from FIDO Publishing. (Highly appropriate, I thought! Cool cover, too!) - And don't forget to check out the contest at the end!

In PIECES OF THE STAR, ex-cop and brain tumor survivor, Vincent Maxwell has been recalled for a special assignment: Capture a killer.

With no obvious common links or clues, Maxwell must work fast before another body turns up.

What he discovers suggests that more than his reputation is at stake. Wrapped up in an unbelievable world of superpowers, he’s dragged in deeper with a connection he never thought possible. Can he use the information to his advantage and stop the killer? Or will death strike before he finds answers?

The man's mouth gaped open and his eyes were wide in terror. Something horrible had happened to him, yet only a small gash existed in his right ear.


Vince looked around the area. The local police force hadn't found any clues since five o'clock this morning when he'd gotten the call. Now the sun had begun to rise and people gathered around the yellow tape, murmuring worries about a possible serial killer.


Could anyone blame them? This was the second killing this month. Both victims had the same cut on the side of their head, but so far, they seemed to have nothing else in common. (Read more at above links.)


As part of her tour, KJ shares how one special dog turned her into a cat - and dog - person... 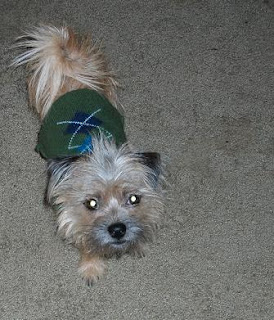 I’ve never been a dog person. Hey, don’t boo me. Anyway, where was I? Oh yeah, a dog person. My husband is notorious for dragging home strays. It all started years ago, and we’ve been through a few pets. Mostly cats, but dogs too.

About a year ago, we were down to one dog, a Blue Heeler and Malamute mix. My husband walked her every day, feed and played with his Princess. But one day he comes home from his walk with a puppy wagging behind Princess. A little dirty Yorkie.

I figured this puppy was someone’s pet, so I posted fliers. Sure enough, someone claimed him. We were sad, because we had come to love him, but took him home (all the way to the end of the street). An hour later, the man is back asking us if we wanted him. His granddaughter was scared of him and hadn’t stopped crying since he came home. (He was supposed to be a present for her.) So, we took him.

Now, like I said, I’m not a dog person. I like my cats, and I have a couple of them. But this little boy has wiggled into my heart. He is the cutest thing ever, does the funniest things, and loves the cats. He’s sweet and has so much personality I wanted to share these funny stories about our Boogie.

I have this knit jacket with the drawstrings in it, the ones that always come out. So, he grabs this drawstring in his mouth, pulls it in front of the cat and tries to get it to chase him. Once he has the cat’s attention, it’s on! He starts running around the coffee table and sofa with the cat on his heels. They’re about the same size too, but Boogie runs a bit faster. He’ll slow down and look back to make sure the cat is still chasing him, and then start running again. This game can go on and on while the family laughs. It’s about the funniest thing I’ve ever seen.

Currently we have another stray cat, well not really a stray - the neighbors moved out and left this cat behind. He’s not fixed and wouldn’t you know it, a female cat turns up pregnant. We have the momma and six kittens in the house in a box right now.

We’re working with a local shelter to find homes for all the cats, daddy too. The kittens are big enough they’ve started climbing out of the box and exploring. But Boogie’s right there to follow them around and make sure they don’t get lost. He makes sure we know where they are and helps herd them together. He’s pretty good at watching two at a time as they roam. So if you ever need a cat-sitter, Boogie’s your guy!

(Boogie sure sounds like a one-of-a-kind dog! Thanks for sharing, KJ!)

** Your Turn: Comment and you can win a copy of KJ's book, PIECES OF THE STAR. Share a funny story about your own dog (ok, cats too!) ha!