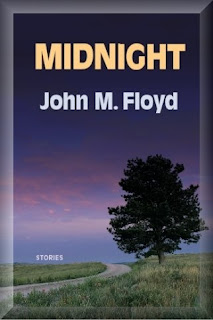 Mississippi author John M. Floyd could be called the king of shorts - short stories, that is.

All told, this prolific author has written - and published - more than 600 short stories and fillers in top publications including, "The Strand Magazine," "Grit," "Woman's World" and "Alfred Hitchcock's Mystery Magazine." Not bad for someone who's been writing for 25 years, but only began getting his stories published in 1993.

A former Air Force captain and now retired after 30 years with IBM, Floyd calls himself "happily worthless." An understatement, considering he still enjoys writing whenever he can.

His new book, MIDNIGHT (Dogwood Press, 2008) features a collection of 30 stories of various genres, from mystery to humor, romance, science fiction, and more. Of note are eight more stories featuring bossy schoolteacher Angela Potts and her long-suffering former student Sheriff Chunky Jones (who, by the way, have appeared in several of Floyd's Mini Mysteries published in "Woman's World" magazine, found at the grocery and WalMart checkouts.)

Writing on the Side

Floyd actually began writing stories as a lark and found he enjoyed it: "I started writing short stories just as a way to pass the time, when I was traveling the globe with IBM and spending a lot of hours alone in airplanes and airports and hotels, etc.--and soon found that I loved dreaming up tales and putting them on paper."

He's since found publishing success, with his fiction being nominated three times for the Pushcart Prize. He also was the winner of the 2007 Derringer Award for short mystery fiction presented by the Short Mystery Fiction Society.

Besides fiction, he has delved into nonfiction and wrote some articles, poems and essays, "but I don't think they're as much fun to write as fiction," he says. "Most of my nonfiction is on the subject of writing, which makes it less of a chore. I also write a weekly column at Criminal Brief with six other mystery writers/readers, and have really enjoyed that."

Asked if he has a favorite story and quote from his newest collection, Floyd picks one of his teacher-sheriff mysteries. In "Dry Spell," bossy retired schoolteacher Angela Potts has just helped the sheriff of her small town solve a case and he asks her how she found out who the robber was. "Snooping," she tells him, "is a full-time job."

With his fiction, Floyd says his goal is simply to be entertaining: "If something in them is educational or enlightening at times, that's so much the better, but my purpose is to write entertaining stories that I hope might bring enjoyment to the reader. If that happens, I'm happy."

And as long as he continues, so are readers.

* Learn more about Floyd's stories and book at Dogwood Press