** If you missed the beginning, start reading here.

Today we conclude our original Christmas tale by Robert W. Walker, author of more than 50 novels including his Detective Ransom series, as well as his reknowned time travel novels taking place in two time periods, TITANIC 2012 and BISMARCK 2013, Hitler's Curse. Thanks again to Robert for writing this! 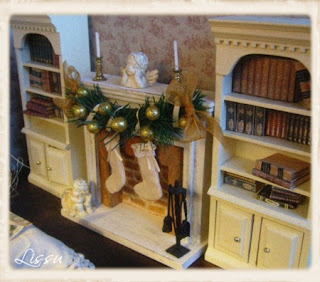 TO RECAP: the family are watching the film to see who is stealing the Cluewellens' Christmas from Julia's dollhouse.

Shortly after, Stevie entered the room, asking, "What kinda movie is this?"

"The movie that's gonna prove you stole the Cluewellens' Christmas!"

Joannie came down from her room and asked, "Are you still blaming that on Stevie? He wouldn't do that!"

"We got you on tape this time, Joannie...or Stevie...whichever one of you guys did it, so there!" Julia set her jaw, determined to watch every hour of the unmoving movie frame by frame. "Mom and me...we gotcha good now. Liar."

Joannie came at her sister. "Who're you calling a liar? Me?"

"Enough, both of you! Stop it. Either sit down and watch the tape or leave the room, but please, no more accusations, Julia, and no more shouting, Joannie-and you, Stevie, stop crying."

"I didn't do it," he complained through tears. "I always get blamed for everything!" 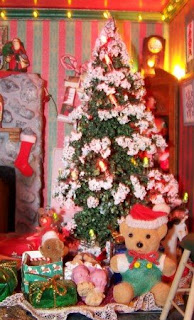 "All I know is somebody stole the Cluewellens' Christmas tree now!" Julia shot back.

"Hey, what's that?" asked Joannie, pointing at the screen. "I saw movement-a shadow-back of the miniature."

Julia, Stevie, and Mother Waldron stared at the slight squeaking noise, too, and in a moment, they all watched a pair of whiskers and a brown button nose rise over the back of the miniature at the chimney.

Newton lived up to his name, always finding ways to escape his cage, and often, Stevie allowed him 'free run time' but Newton always returned to his cage. Newton had even found a way out of the house one night.

"What's he doing?" asked Julia. "OMG-he's going down the chimney." 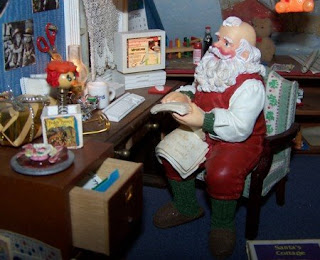 "But...I mean how...why?" she asked. "Why's he terrifying the Cluewellens and destroying their Christmas?"

"You really think Newton is thinking along those lines, Julia?" Joannie couldn't hold back her laughter.

With the tree clear of the door, it snapped closed, and Newton scurried away with the five-inch high tree, ornaments trailing. He truly did look like a miniature version of The Grinch except that he was brown and not green.

"What's he doing with all the stolen goods?" asked mom. "Shall we find out?"

"I think you're gonna need a ferret whisperer or a pet shrink to figure that out, Mom," replied Joannie, still laughing. 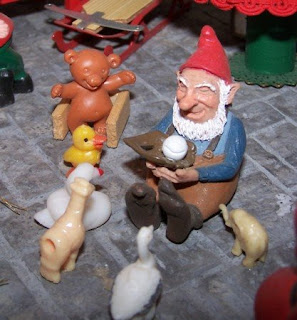 "Nothing funny about that little rat destroying the Cluewellens' Christmas!" countered Julia.

"Why don't we all just go on a scavenger hunt?" began Mom. "To see where Newton is stashing all the decorations and presents." The four of them started for Stevie's room where Newton lived in a cage. Everyone in the family had gotten so used to Newton's escapes and escapades about the house that no one took great notice of him of late.

"What's going on?" asked Jack Waldron, their father, who'd caught them gathered at the foot of the stairs as he came through the door, home from the office.

Everyone spoke at once until Anna calmed them and pointed to the still action shot on the TV. "We caught Newton red-handed. "He's Julia's Christmas thief."

"Must be the shiny stuff attracts Newton, eh?" asked Jack. 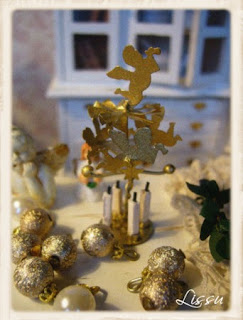 "But he's never done this before!" Anna replied. "Any rate, we're heading up to Steve's room to see where he's stashing the goods."

"Say, did anyone read that book that came with the ferret when you bought Newton at the pet store?" asked Joannie, who was browsing the book for any clues.

"Who's got time to read?" asked Julia.

They all went for Stevie's room, and looked into Newton's cage, a made-over fish tank. There, amid the usual sawdust and toy shelters and fake greenery, was a stash of Christmas miniatures, from the tree, to the presents and the stockings. All of it lay in a neat, orderly circular design. The look on Newton's face said, "I confess." 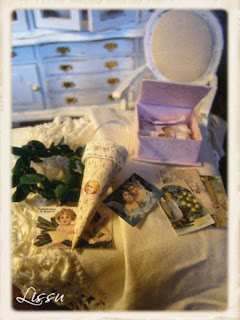 Joannie handed the paperback book on ferrets and ferret behavior to her mother. "Take a look at the last section on page sixteen."

"What is it?" asked Julia. "Nothing in that book could possibly excuse this rodent's behavior, and as for you, Stevie-this is all your-"

"No, Julia!" countered her father, who'd now read page sixteen. "No way is this Stevie's fault!"

"You owe Stevie and me an apology," Joannie said to Julia, having closed in on her, nose-to-nose. "And all our friends, too!"

"You do owe everyone an apology, Julia," her mother agreed. "In the meantime, Newton is going to need a new name." 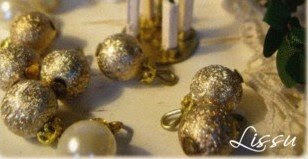 "Newton is a girl, and she's stealing shiny objects to make a nest, because she's going to have baby ferrets."

"OMG!" replied Julia. "That's it! That explains the mystery."

"But if Newton's not a boy...what're we going to call Newton?" asked Stevie.

"Why don't we make it Madame Curie," suggested mom. "I think she outsmarted us all. In any event, case closed."

Stevie lifted the flimsy lid and started to reach in to retrieve the Cluewellens' Christmas stuff-his sister's stuff, but Julia stayed his hand. "No, Stevie. She-Madame Curie-she needs it now more than the Cluewellens."

"Aren't you ahhh worried about the Cluewellens?" asked Anna of her daughter.

"They'll understand when I explain it to them," Julia replied and shrugged, "and besides, there's always next year."

Anna hugged Julia and Jack put a hand on his daughter's shoulder, and with the entire family looking on at Newton-now Madame Curie-every one smiled, and if ferrets can smile, Madame Curie smiled back, a knowing glint in her eye.

"I have an idea for the Cluwellens' Christmas," said Stevie.

"Why not give them a front row seat for Christmas?"

"Put their house under our tree!" 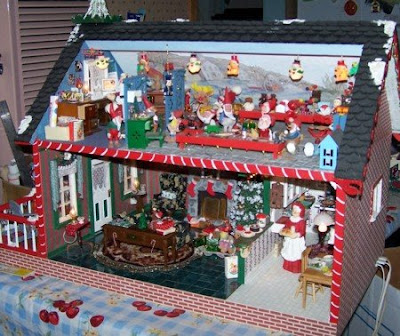 Everyone agreed it was a wonderful solution, and that Julia had a lot of apologies to make, and that she'd tell and retell Newton's story between now and Christmas quite often indeed. 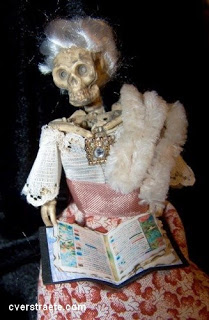