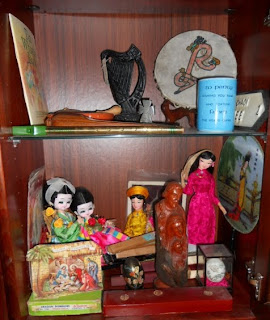 For the last post on my blog for the MG/YA Blog Tour, author Rebecca Ryals Russell is not only sharing about her books, but what she does when she's not writing...

(** Start YA Ebook Tour: Barb Ehrentreu, "If I Could Be Like Jennifer Taylor")


A Home Filled with Collections of Love

When Chris asked what I collected, I had a hard time figuring out which collection to talk about. After all, I collect old cameras, with some from my father’s childhood in the ‘30’s; then there’s my treasured Vintage Florida collection with 1950’s ash trays, dishes, tea towels with cheesy flamingos, tablecloths with colorful maps of Florida, an open-mouthed ceramic gator ash tray that holds a handful of ancient postcards; or my Precious Moments collection begun when my daughter was two and looked exactly like a Precious Moment.

Now she’s 20 and while still adorable, it’s just not the same.

Or perhaps my large collection of Vintage Toys—including my original black-haired Barbie and Midge in their original black vinyl case full of 50-year-old clothing, and Tess with the tresses that grow or shrink; Fisher Price pull and push toys, stacking wooden doughnuts; Wedding Doll in original plastic dome; fuzzy-haired Trolls of all sizes. 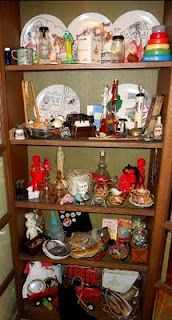 I could go on and on. Then I mentally shuffled through the hundreds of AWESOME Vintage Rock 'n Roll Vinyl Albums and 45’s I’ve collected and inherited. We love spending a rainy afternoon sitting in our "music" corner, listening to these scratchy old treasures. 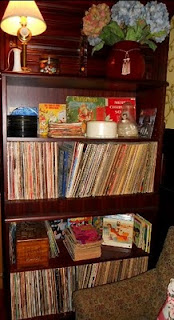 I’ve been collecting vintage Christmas decorations for about 20 years, from thrift stores and eBay. Then when my Mom died I inherited a boatload! All of which I had grown up with. Now, each Christmas is a walk down memory lane as I decorate the tree or mantel with the same ornaments and paper Santas or pinecone Elves that I’ve seen for the past half-century. I can only hope at least one of my children has inherited my love of collecting and valuing the nature of Vintage. 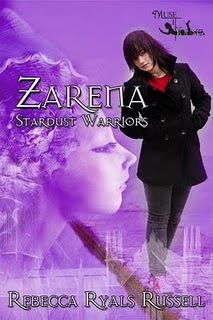 ZARENA
14-year old Zarena spends time with a Holy Order of Clerics on their hidden world of RevrumNatura, while she receives training in Martial Arts, Herbology, Astronomy, Weaponry and Mind Control. Destined to become the leader of the Vigorios, child warriors, who will assist the Seraphym in the war against the demon-dragons of Dracwald, Zarena grows up in a hurry.

Lonely and homesick, she meets a Mermaid who encourages her to talk about her training. Is this new friend too good to be true? Zarena learns a valuable lesson about trust and betrayal—a lesson that will serve her well as leader of the Vigorios. 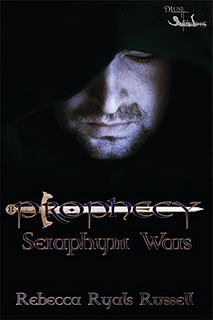 PROPHECY
For centuries the residents of Solsyl lived in peace and harmony with the planet. Then the dragon-demons arrived, causing the Great Shuddering. Majikals from everywhere scurried to find shelter from the evil while humans hid. Laud regretted his rash decision of exiling the demons on Solsyl and asked one of his advisors, a member of The Conscientia, to protect his people.

Jeremiah Holyfield agreed to leave the peaceful world of RevrumNatura for a life of constant strife and fear on the newly renamed planet of Dracwald. But Narciss, ruler of Tartarus and King of the demons, desperately wants what Jeremiah has sworn to protect—a Prophecy of Narciss’s future doom. And Narciss refuses to take no for an answer. But Jeremiah discovers allies along his path and even true love, which he never dreamed possible. But forever is a long time to protect something without ever letting down one’s guard. 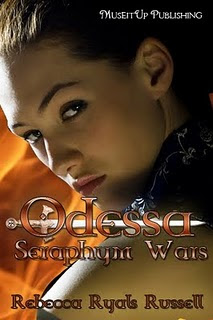 ODESSA - Seraphym Wars Series
17-year-old Myrna is drawn into the middle of an epic battle between Seraphym and Demons. An average High School student from Florida, struggling with inner demons resulting from an attack when she was 15, she wakes one morning on the Steampunk planet of Dracwald, home of the demon-dragons responsible for her brother’s recent murder as well as many other atrocities in the news.

She meets sweet and sensitive Michael, who explains that according to prophecy, Myrna must gather the remaining six Vigorios (teen warriors with special talents) then train with the Majikals on an enchanted island. He accompanies her on the quest, but harbors a secret past that ironically would destroy all the faith she has placed in him.

Will love and lust, jealousy, greed, deceit and distrust break the delicate tie that binds these teen warriors called The Vigorios? Can a troupe of teens help the Seraphym finally defeat the massive empire of evil dominated for eons by the demon-dragons of Dracwald?