Ebook Tour: Welcome to Marva Dasef, author of the paranormal book, Bad Spelling. What's this about witches and werewolves? 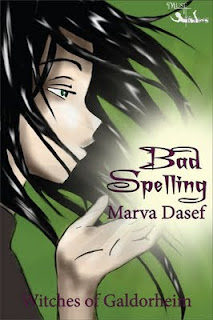 Today I welcome Marva Dasef, author of the spooky-sounding BAD SPELLING, Book 1 of the Witches of Galdorheim - A klutzy witch, a shaman's curse, a quest to save her family. Can Kat find her magic in time?
** Coming October 14 from MuseItUp Publishing. **

About the Book:
If you’re a witch living on a remote arctic island, and the entire island runs on magic, lacking magical skills is not just an inconvenience, it can be a matter of life and death–or, at least, a darn good reason to run away from home.

Katrina’s spells don’t just fizzle; they backfire with spectacular results, oftentimes involving green goo. A failure as a witch, Kat decides to run away and find her dead father’s non-magical family. But before she can, she stumbles onto why her magic is out of whack: a curse from a Siberian shaman.

The young witch, accompanied by her warlock brother, must travel to the Hall of the Mountain King and the farthest reaches of Siberia to regain her magic, dodging attacks by the shaman along the way. At the Troll Kingdom, a young troll, Andy, joins the siblings in their quest to find the shaman and kill the curse.


In keeping with the book topic, read on for what Marva has to say about... werewolves! And be sure to comment to be entered in the contest, see details at the end!

The most well-known werecritter is the werewolf. At this time in the cycle of what’s hot, what’s not, werewolves are getting great press via the Twilight books and movies by Stephanie Meyer.

I have to admit it. Werewolves can be totally sexy guys (gals) in human form. Meyer finally got one legendary being right. Well, she agrees with my concept, which I used before I read any of the Meyer saga. To tell the truth, I still haven’t read any of the books, because the first movie put such a bad taste in my mouth. OMG, Edward loves Bella because she SMELLS good?!?!? Gimme a break.

As we all know, werewolves are shape-shifters. When the full moon rises, your normal guy (or gal) changes into a werewolf. Sometimes, they are portrayed as mindless beasts who’ll rip the throat out of anybody they come upon. Other portrayals show that the maintain their human intelligence when shifted. Since the legends vary so wildly, I decided to not only have my werewolves remain intelligent, but also able to shift from human to wolf form at will.

How do I justify this turning away from the legend? I don’t need to. Some folks will howl in disgust with my tampering with the myths. Let ‛em whine or even bark. I’ve seen authors do just about everything with the tropes: weres, vampires, demons, fairies, angels, ancient gods. That, I believe, is perfectly okay. You want a half-vampire, half-demon? I’ve seen that in paranormal more than once. Gods less than god-like? Yup, been done.

Anyway, I have a six-pack of werewolves in BAD SPELLING. Here’s a taste (ha ha, get it?) of my werewolf mashup.

Rune joined them. “Are we going to stand around here all day? Where’s the alternative transportation you told us about?”

Andy tore his gaze from Kat and scanned the slope. “There it is.”

Kat looked where Andy pointed and gasped. “What—?”

“Don’t worry. They won’t hurt us,” Andy said with a confidence Kat didn’t quite trust.

“But werewolves?” There was no mistaking them for regular wolves. Besides being twice the size of the largest of the wolves, the eyes gave them away. Even from a distance, Kat could see them gleaming with intelligence.

“Look behind them,” Andy said.

The big wolves loped along easily; they were harnessed to a sled, bouncing along behind them. The speed with which they approached told her they would have no problem pulling a heavy load.

The wolves came up the slope and stopped in front of them. The lead werewolf looked at each of them with some interest. Kat felt like an item on a menu, like when they faced the polar bear.

The lead wolf said, “Good morning. Hmm. Humans, not trolls. Interesting.” The wolf looked over his shoulder at the others. “Remember, King Olaf hired us to deliver these people to where they want to go. You are not to eat them.” The other wolves nodded, but their long tongues hanging over gleaming, razor-sharp teeth was not a reassuring sight; their mouths dripped saliva in a most disconcerting manner.

The lead werewolf turned his pale yellow eyes back to Andy. “So, where are we going?”

Andy briefly explained what they wanted. The werewolf nodded and said, “If I understand correctly, we are looking for the Sami tribe. Do you realize they’re nomadic?”

“Sort of. All I know for certain is they spend much of their time on the northern coast.” Andy glanced at Kat. “Anything else?” She shook her head.

The wolf stared at Andy for a moment and then said, “Well, come closer so I can smell you. The girl, too.”

Kat hung back. “Why do you want to—? Oh, I understand. You can find the Samis through our scent.”

“I call myself Mazi in my wolf form. I try to keep my human life separate.” The werewolf raised his head and howled. The other wolves joined in the chorus. Goose pimples rose on Kat’s arms. Then, they all fell silent and pricked their ears, turning their heads this way and that. From off in the distance, Kat heard a faint answering howl.

* Marva, thanks for stopping by. Can't wait to read the book!