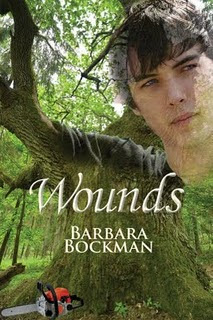 Today is a reciprocal day - I'm at Barbara Bockman's blog, and she's visiting here so stop by both places. Be sure to leave a comment here to be eligible to win a PDF copy of WOUNDS.

Barbara Bockman got a degree in creative writing and then went into teaching. She is no longer teaching English at the junior college level, but says she's far from retired. She is the author of WOUNDS from MuseItUp Publishing.

About the Book:
An abused boy learns that accepting help from friends is better than running from his problems or destroying things.

After Craig’s mom dies, his dad becomes abusive. Craig reacts by vandalizing others’ property and becomes an outcast in the community. He runs away like his father, whose disappearance remains a mystery.

Though he tries to cut down his neighbors' tree, the Arks open their hearts to him and take him into their home.

Craig makes a friend in Nelson Ark's dog and when the community and a youth group raise money to "mend" the tree, Craig begins to mend his own life.

What got you started in writing?
When my grandchildren were very small, I put together little books for them. I laminated the pages and tied them together with colorful shoestrings. When the little ones came to visit, they chose those books off the bookshelf. They were more craft projects than books, but those and the books from the library that I read aloud to the children created an itch in me to write real stories of my own. I’m glad I pursued the project because it has led to my first published middle grade novel from MuseItUp Publishing.

What inspires you to write?
Many things inspire me. The antics of the grandchildren and children around me, newspaper and magazine articles, chance encounters with people and with ideas I run into in books. WOUNDS was inspired by an attack on a tree that I read about. I didn’t want to write about adults, so I created a situation with children that fit rather loosely to the circumstance I had read about.


When I'm not writing, I...
Stay busy. From June to December I’m taking care of my caterpillars and releasing butterflies. I plant lots of milkweed and the mother monarchs lay their eggs on the leaves. I also have a long fence covered in passion vine with stunning purple flowers for gulf fritillaries and zebra long wings to lay their eggs on. I attract swallowtails with parsley and citrus trees.

In the house, I have a tubular net to keep the caterpillars in while they grow, pupate and emerge from the chrysalis to protect them from lizards. It’s a fascinating process to watch and there is nothing more beautiful than the green monarch chrysalis with its specks of gold. Both butterflies and hummingbirds love to drink nectar from the butterfly bushes and bottle brush tree and other flowers. I can’t think of a better way to bring beauty into my life while helping Mother Nature.

How does your writing influence your life - and how does your life influence your writing?
My writing has brought me many writer friends, both at home with my SCBWI group, and online. That is probably the best influence it's had on my life. Much of my life experiences are included in WOUNDS. The dog, Siegfried, is patterned after the Dachshund my husband gave me as a Valentine once. Her name was Daisy, and she is honored in the book; I named a fictional hurricane Daisy. The story is set in the North Florida panhandle where I once lived. I mentioned the Biophilia Nature Center that is located in Alabama. That center is the brainchild of my friend Carol Lovell-Saas. Carol and I met as members of the Pensacola Native Plant Club.

What do you want people to take away from this book?
I hope people, especially teen readers, will realize that spur of the moment decisions made in the heat of a moment of crisis can have far-reaching consequences. It’s best to be calm and reflect before taking any action out of fear or hatred or jealousy. And I hope they can see the beauty of the non-tropical part of Florida with its oak and pine trees, not the palms people usually think of when they think of Florida.

Craig looked around at the people in the courtroom. They looked as puzzled as he felt. But Craig knew he was the most stunned of all. When he looked at Mr. Ark their gaze met and locked. With the specter of the tree hovering between them, Craig saw a co-mingling of intense pain and tenderness on Mr. Ark’s face.

How could I go live with him? I’m his worst enemy.

“Your Honor,” said Mr. Ark, “my wife and I don’t want Craig to get into the state system; nor do we want him returned to his father—at least not yet.”

“Let me get this straight, Mr. Ark.” Judge Borosky’s gaze bored into Mr. Ark’s eyes. “You are offering your home to the vandal who tried to destroy one of your most prized possessions?”

“I know it’s bizarre, Your Honor. Now, don’t get me wrong. I’m no Goody Two-Shoes. This is just common sense. I don’t want to put this boy in a place where he can learn to become a real criminal.”

“Oh, I suspect there’s more than common sense at play here…but we’re not sending him to prison, Mr. Ark.”

“Yes, sir. Nevertheless, the foster home circuit is simply unnecessary in this case. Why burden the state and place the child with strangers, when there is a family he knows who will take him in?”

** NEXT on YA Ebook Tour: Rebecca Ryals Russel, "Zarena"

A person who raises butterflies has to have fey blood. Do you know your real geneology, Barbara?

Congrats on your book too. I hope fairy dust gets splattered all over it.

Thanks so much for having me on your blog today, Chris. It's been fun, as you say, reciprocating with you on the Muse Blog Tour.

Hey, Marva, all I know is that my ancestors were from Scotland and Ireland. Do Leprechauns count?

I love the premise of your book. We have a poster on our refrigerator for everyone in our family (especially the four children) to see. It reads: I have the power to decide. We use that to remind ourselves that we can react different ways to a situation, some good and some bad, but we are the decider of our own reactions. It sounds like that is close to the message you are trying to send to your young readers.

Much luck to you!
Michelle Pickett
Concilium, available July 2012 from MuseItUp.

Hi Barbara,
Love Marva's comment about the fey blood. We have our own little fairey here. Yay. How do you hide your wings. Too funny. Congrats on the book. Sounds divine!
C.K. Volnek

Loved your book! I have recommended it to many of my friends who have tweens and young adults. Way to go, Barb!

Hey, Charlie, the closest I ever came to having wings was playing Tinker Bell in an event in college.

Michelle, you are right about the message. I hope I wasn't heavy handed.

Betty, I'm glad you enjoyed the book. Thanks for recommending it.

Chris, this was my last visit on the Blog Tour. Thanks.