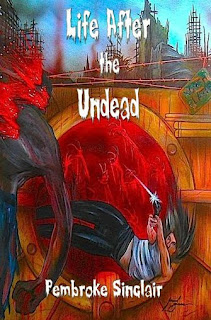 Today, I welcome Pembroke Sinclair, author of LIFE AFTER THE UNDEAD.

As democracy crumples and the world melts into anarchy, five families in the U.S. rise to protect the survivors. The undead hate a humid environment, so they are migrating westward to escape its deteriorating effects. The survivors are constructing a wall in North Platte to keep the zombie threat to the west, while tyranny rules among the humans to the east.

Capable but naïve Krista is 15 when the first attacks occur, and she loses her family and barely escapes with her life. She makes her way to the wall and begins a new life. But, as the undead threat grows and dictators brainwash those she cares about, Krista must fight not only to survive but also to defend everything she holds dear—-her country, her freedom, and ultimately those she loves.

How did you start writing?
I've always enjoyed writing, ever since I was little. I tinkered with it on and off, but didn't get serious about it until about six years ago. A coworker really encouraged me to get my butt in gear!

What inspires you to write?
Everything. I will overhear a snipit of a conversation and think, "Hmm, that would make a great story." My dreams also play a big role in what I write, as I have some dooseys. This particular story was inspired by a dream, and it started out as a short story. From there, it grew.

When I'm not writing, I'm...
...Taking care of my children and working two part-time jobs. Really, my only hobbies include writing and editing. Occasionally (more often than I should), I spend my time on the couch in front of the TV!

How much of 'you' is in your books?
I think authors always put themselves into books, whether its just the time and effort, or their actual soul. As I mentioned previously, I write to figure out how humans react to certain situations, and I like to look at it from different perspectives. Sometimes the reaction is what I'd do, and other times it's not.

What do you want people to take away from this book?
Fun. I want you to read my book for enjoyment and think: "Wow. That was one hell of a ride!"

What is your favorite part of writing and of your book?
This is hard to answer because I'm my own worst critic, and I kinda think everything stinks. I like how my character grows throughout the book, but I don't know that I have one favorite part.

My favorite part of writing is the initial process. I enjoy creating a new world and writing it down, then going back and editing it.

About the author:
Wyoming author Pembroke Sinclair has had stories published in the Cynic Online Magazine, Static Movement, Sonar 4 Publications, and Residential Aliens. Her story, “Sohei,” was named one of the Best Stories of 2008 by the Cynic Online Magazine. She also is author of COMING FROM NOWHERE, available in ebook and print. She is a staff writer for Serial Killer Magazine and works as an editor for an environmental consulting firm. Contact her at pembrokesinclair@hotmail.com.

** NEXT on YA Ebook Tour: CK Volnek, "Ghost Dog of Roanoke Island"