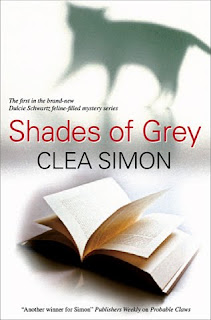 What better spooky read than a book with a ghost cat?

Following in the "paw prints" of her popular Theda Krakow mystery series, this time, author Clea Simon is showing that cats do have more than nine lives in her new "cat-centric" mystery series, beginning with SHADES OF GREY (Severn House, Sept. '09)

In the first of the brand-new Dulcie Schwartz feline-filled mystery series, Dulcie's beloved cat Mr. Grey's been put to sleep, and her new roommate, Tim, is a jerk. Walking home, she sees a cat the spitting image of Mr. Grey, and hears a voice say, I wouldn't go in just now. She enters to find Tim dead, stabbed with her own knife. Dulcie's in the frame for murder and she hasn't seen the last of Mr. Grey, either . . .

First Graphs from SHADES OF GREY:

The carving knife was the last straw.

Stomping along the steaming sidewalk, her mood matching the thunder clouds overhead, Dulcie knew that the sentence made no logical sense. How could a knife be a straw? She could hear herself asking her students that, her usual wry smile softening the criticism as she urged them back on the metaphorical track.

But as she trudged toward the apartment she shared, for the summer and increasingly unwillingly, with Tim, she couldn't stop the grammatical train wreck of her thoughts.

She sighed and paused for a moment, looking around at the other drones on the street. How did they do it, day after day? A man in a suit passed by. At least he'd been able to shed his jacket, which now hung over his shoulder. No such relief for Dulcie. Pantyhose in July ought to be illegal. Had last summer been so muggy and dense?

Thirty minutes before, she'd been shivering, trapped in the recycled cold of the over-air conditioned Priority Insurance office, like a bug in some global version of contrast and compare. She shouldn't be temping. Shouldn't have been in that soulless place at all. Insurance. Bah! It was all numbers juggling. All about profits and odds; nothing that actually affected people. She should have been in the pleasingly cool depths of Widener Library, lost in the fogs of the northern moors. Or, perhaps, on a night voyage across the Carpathians in a horse-drawn carriage. At the very least, she should have her thesis topic by now.

According to the terms of her biggest grant, she should be writing already. But right before the holiday break, she'd heard that summer school enrollment was down. Which meant that her teaching section was canceled. No "Nightmare Imagery in the Early British Novel," and by then it was too late to even grab a section of the basic required survey course, English 10, the bane of freshmen and the salvation of starving grad students. It was too late to back out of the summer sublet that had let Tim into her home. And although she hadn't known it at the time, it was too late for Mr. Grey.