First Graphs: Secrets to Die For by LJ Sellers 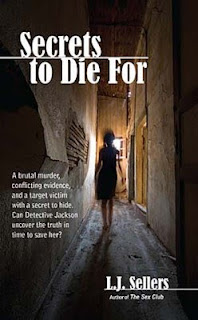 A brutal murder, a suspect with a strange story, and a kidnap victim with a secret to hide—can Detective Jackson uncover the truth in time to save her?

But nothing is as it seems and complications develop when new evidence points to a serial rapist who’s becoming more violent with each attack. Raina’s lover Jamie knows what the rape victims have in common, but won’t tell for fear of revealing her own secrets.

When Jamie disappears, Jackson knows time is running out and he’s determined to discover the truth before the body count goes any higher.

Except from SECRETS TO DIE FOR:

Raina shut off the motor and glanced up at the puke-green
doublewide with a chunk of plywood over the front window.
The near dusk couldn't hide the broken dreams of the trailer's
occupants, Bruce and Cindy Gorman. Raina wasn't here to
see them. She was here for Josh, their eight-year-old son.

As a children’s support advocate, Raina had been assigned to monitor Josh six months ago, when the state of Oregon had taken temporary custody and placed the boy in foster care. Her primary responsibility was to stay in touch with Josh and to ensure the system did not fail him. During that time, the Gormans had danced all the right steps–anger management for him, parenting classes for her, and a rehab program for both. So now Josh was back in their care, and this was Raina’s last official contact…for now.