New story on dog rescue and dog rescuers in Wisconsin 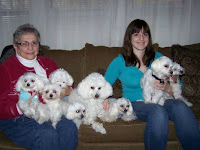 A new story and photo I did on dog rescuers in Wisconsin is now online at Prime Magazine. The story is in the Jan/Feb. 2012 issue.

Story and photo by Christine A. Verstraete

Looking at Rosie the poodle scoot across the carpet or play with her toy, you wouldn’t think she’s different than any other dog.

While it’s not known whether it was genetics or a result of having spent her life in a crate as a breeder at a puppy mill, 6-year-old Rosie’s back legs were atrophied and unusable. After being rescued, both of the dog’s back legs were amputated below the thigh, but that hasn’t stopped her. Rosie is a now a “spokesdog” against puppy mills and a symbol for pet adoption, appearing at local parades and other events.

She also is a member with her owner of Wisconsin Citizens Against Puppy Mills.

“She hops around and runs like any other dog,” says Rosie’s owner, Mary Palmer of Racine, who’s also founder and president of Northcentral Maltese Rescue Inc. (Read Rosie's story.)

See issue for rest of story.