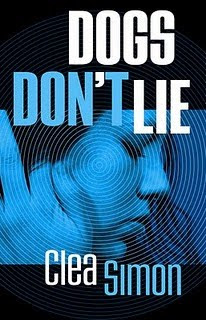 Well, the headline is only slightly exaggerated.

Author Clea Simon, who's known for her cat-centered mysteries (PROBABLE CLAWS, Theda Krakow Mystery Series, Poisoned Pen Press; and GREY MATTERS, book two in the Dulcie Schwartz mystery series, Severn Press), does have a cat in her upcoming latest-- but the book's real focus is a dog!!

DOGS DON'T LIE, a Pru Marlowe Pet Noir Mystery, will be published in April 2011 from Poisoned Pen Press. (The pictured cover is not final yet.) The book centers on a traumatized, rescued pitbull and a pet psychic. Sounds good. Great idea, Clea!

Pru Marlowe isn't your ordinary animal psychic. A tough girl on the run from her own gift, Pru left the big city to return to her picturesque Berkshires hometown looking for a little peace. Too bad that her training as an animal behaviorist got her mixed up with Lily, a rescue dog, and Charles, her person.

Now Charles is dead, and Lily looks good for it. After all, Lily is a pitbull, a fighting-ring dropout, and way too traumatized to give Pru a clear picture of what she has witnessed. But Pru knows something about bad girls trying to clean up, and, with a sense of justice strong enough to overcome her dislike of human society, she takes the case.

Listening to the animals, Pru picks up clues—and learns there are secrets in the pretty little town that make murder look simple. Unable to tell anybody about her psychic abilities, uncertain at times about her own sanity, Pru comes to realize that if she clears Lily, she'll likely become the prime suspect—or the next victim.

While the only creature she can totally trust is her crotchety tabby Wallis, Pru's got to uncover the real killer—and find a way to live with her gift—before the real beasts in the town savage her and those she has come to love. I'll include more on the book nearer publication.