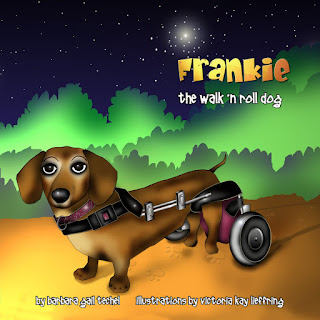 It began when Frankie, a fun-loving, playful dog, jumped up onto a food container. It fell and so did she. The jump itself didn't cause the injury. Instead, Barbara learned that Frankie had Intervertebral Disk Disease (IVDD), a disorder common in Dachshunds.

After surgery, Frankie was given only a 10 to 30 percent chance of being able to walk again. Despite therapy, it wasn't to be. Frankie was paralyzed.

Once Frankie was fitted with a rolling cart (a dog wheelchair), Barbara decided to write about the experience. Her children's book, FRANKIE, THE WALK 'N ROLL DOG, (Joyful Paw Prints Publishing) shares the little Doxie's story of determination and spunk. 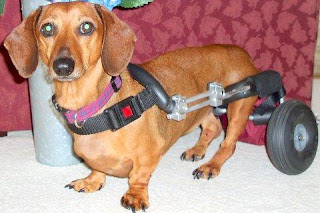 "I decided to write the book because I was so inspired by Frankie, watching her as she healed and then adjusted to her new way of getting around with wheels," says Barbara. "I also was inspired by children who were fascinated by Frankie as I started taking her out in public. They were curious about her and wanted to know why she was in a wheelchair."

Not long before Frankie's injury, Barbara was devastated by the loss of her Labrador, Cassie, to bone cancer. To cope, she began writing a monthly newspaper column about dogs. Losing Cassie, she says, "made me search for more in life and want to find a way to give back."

Then Frankie was injured. Despite the costs for surgery and the wheeled cart... despite the heartbreak... and despite the adjustments, Barbara knew she couldn't give up on Frankie.

"I was uneducated in Intervertebral Disk Disease," she says. "When Frankie suffered her injury I was very scared. I couldn't imagine what her life was going to be like if she didn't walk again. How would she get around? Would she be depressed? I also wondered how I would take care of a handicapped dog. I was told about the dog carts ('doggie' wheelchairs) by the surgeon and was assured if Frankie did not walk on her own, the cart would give her a quality life and help her get around.

"By writing her story I hope to educate others about this disease, while at the same time showing that animals with disabilities really can live a long, happy life if given a chance." 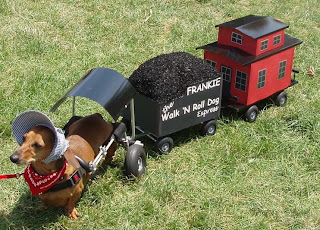 "There were many lessons I learned from Frankie," Barbara says. "The biggest one was about challenges and realizing I always have a choice when I am faced with a challenge. Frankie overcame adversity with dignity and grace. It made me realize I can always choose to be positive when facing tough things in my life. I decided I wanted to really teach that to other children and felt I could make a difference with Frankie's story."

And Frankie? The dog, whom Barbara calls her "tweenie weenie" since she surpassed the Miniature Dachshund size of 9-11 pounds but at 13 pounds is smaller than Standard size, laps up the attention.

"Frankie is a determined little dog," says Barbara. "She has a very sweet personality and is very good around children. This is my mission in life that I have been called to do. I consider it a great honor to be Frankie's mom and to share her message of hope and inspiration.

The book received the Merial Human-Animal Bond Award from the Dog Writer's Association of America. Frankie also was inducted into the 2009 Wisconsin Pet Hall of Fame. 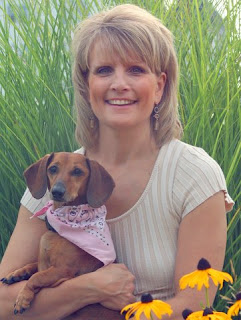 But beyond the awards, the best part for Barbara is taking Frankie (who will be 10 in August) to visit local nursing homes and schools.

She'll share some of those adventures in the sequel, to be published next year. FRANKIE, THE WALK 'N ROLL THERAPY DOG VISITS LIBBY'S HOUSE will again be illustrated by fellow Wisconsinite Victoria Kay Lieffring.

"Frankie has inspired oodles of children around the world, some with physical challenges," Barbara says. "She forms a special connection with them. She gives kids hope that they can face their own challenges by having a positive attitude. I'd have to say that is a pretty wonderful silver lining."


** A portion of the book sale proceeds will be donated to the Rolling Dog Ranch Animal Sanctuary in Montana.

Ranch owners Steve Smith and Alayne Marker left careers as attorneys to "follow their dream" and care for animals with disabilities. The 160-acre nonprofit ranch, begun in 2000, is now home to dozens of disabled animals including 20 blind horses, dogs who are blind, disabled Dachshunds, and 10 cats.

"I chose Rolling Dog Ranch because they followed their hearts," says Barbara. "Both Steve Smith and Alayne Marker left great paying corporate jobs to follow their hearts and take care of animals with disabilities. I think the work they do for physically challenged animals is so remarkable." ** 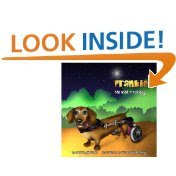