This year I'm featuring some terrific spooky and eerie short fiction by fellow authors with miniatures from various miniaturists as illustrations. I'll match them as best as I can with the story,  but you may have to use a little imagination...


A TRACE OF VIOLET

I feel so much better now.  I look better, too.  My dark hair falls in long waves over my smooth shoulders.  My lips are full and red.  My skin seems very pale, but that’s not surprising, given my recent ordeal. 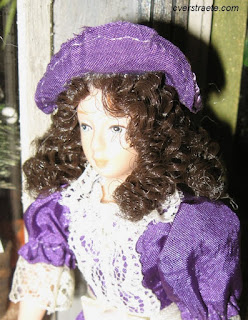 My gown looks beautiful—just like new—with delicate handmade lace at the collar, sleeves, and hem.  It’s violet, of course, like my eyes … and like my name, Violet Frost.

All Frosts have violet eyes.  Every family member has, stretching all the way to the Middle Ages, which is as far back as reliable ancestral records go.  In those dark times, some people called our eye color a curse, proof that the Frosts consorted with witches and demons. 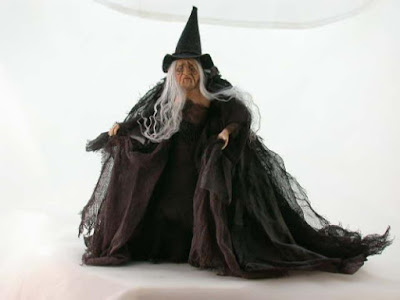 For me, though, it’s a trademark—like lavender dresses, lilac perfume, and purple sapphires.
Unfortunately, our family has plenty of actual curses.  My mother’s was catalepsy. She had a lifelong fear of being buried alive, ever since she fell off her horse as a girl and woke to find herself being given Ministration at the Time of Death (what Catholics call “Last Rites”).  Two subsequent incidents—at age twenty-six and thirty-nine—caused her to make plans to avoid any premature burial, strategies agreed to by the rest of the family and, since then, adopted as a Frost tradition.

Frosts are neither embalmed nor buried in the ground.  Rather, when we die, we are placed in a niche in one of the family crypts, the oldest of which lie in the catacombs beneath Frost Hall. 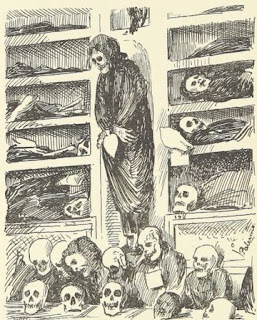 Our tombs are not sealed, but, rather, can be opened from within by the slightest touch on the capstone plaque. It’s true that easy infiltration of air into the niche speeds decomposition, but that’s a far less grievous insult to a corpse than not being able to breathe would be for a living cataleptic.

Despite these elaborate precautions, when my mother was finally sent to the tomb—at the too-young age of forty-nine—she never again walked in the light of day. As her only child, I waited and waited—and frequently checked her sepulcher myself, just to be sure—but my mother did not return to the land of the living. When we put her into the crypt, she was well and truly dead.

I never exhibited any signs of my mother’s affliction.  Not until the night of my twenty-sixth birthday, a little more than a year after my mother’s death. The birthday celebration my uncle had prepared for me was one of the most elaborate ever seen at Frost Hall.  He spared no expense.  Partly, I think, as a tribute to my late mother—who had been fond of big parties—but also, I’m sure, because I remained unmarried, and he hoped to attract for me an acceptable suitor.

I was enjoying the attentions of Ephraim Corman and Bramwell Winslow, both of whom were charming and well-heeled local gentlemen, and either of whom might have made a suitable mate for a Frost maiden on the verge of spinsterhood. 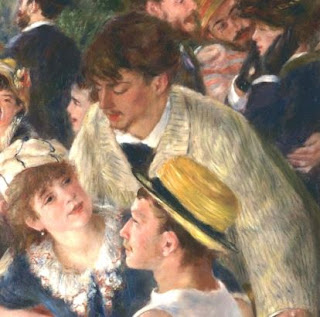 Delightfully, I found no easy way to choose between them. Then an idea struck me. Perhaps, I thought, I should play a game of hide-and-seek, and see which one of them can find me.  Given the sprawling nature of my ancestral home, catching this eligible Frost lass would be no mean feat—and perhaps a sign of true love and devotion. And the winner would get, at the least, a kiss. My little scheme brought a smile to my lips.  I always liked hide and seek!

I relayed the notion to my suitors, both of whom readily assented to the test.  Then I ran off into the twisting corridors of the manse. They waited the agreed upon time before following, each in his own direction, each doing his utmost to track me down and capture my affections.

I moved swiftly through the mansion, careful to leave only the barest trace of my passing: a purple flower removed from its vase and left on a table, a spritz of my lilac perfume in the air. I intended to hide in the gardens, amid the lilacs and lavenders.  But as a final jest, I circled ’round behind my beaus—using some of my home’s many hidden passages—and made a visit to the punch bowl in the great ballroom.

My appearance at the main revel would, I hoped, both throw my admirers off the true scent and tease their masculine sensibilities. If everyone else at the party had seen me while they were searching, why hadn’t they? 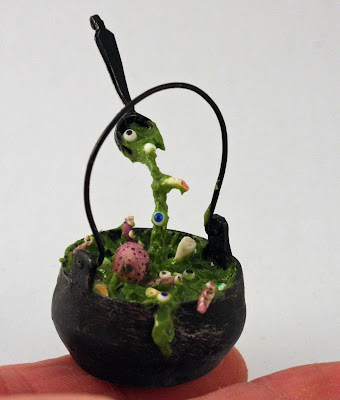 I chuckled quietly at the jest as I raised the glass of punch to my lips. But I had taken barely one little sip, when, all of a sudden, a fit of dizziness overcame me. The whole world swam before my eyes, and I heard the partygoers crying out in alarm as my knees buckled and I crumpled to the ballroom floor.  Then everything went black.

When I awoke again, at first, I had no clear idea of where I might be. Had I been taken to my chambers?  If so, it was darker than any night I ever remembered—completely black, in fact.  Perhaps the curtains of my bed had been drawn, as well as the drapes covering the windows.
I reached out to throw back the bed curtains. 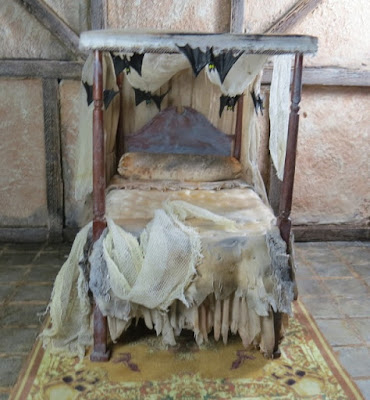 My hand encountered a wall of solid stone.I reached in the other direction and found stone there, as well.A horrific chill ran through my body.  I panicked, wailing and scratching at the walls of my tomb—for I realized now, that was where I must be.  I’d had a cataleptic fit, and my well-meaning relatives had buried me!

I am not sure how long I screamed and clawed at my niche; it seemed like ages.Then I remembered my mother and her elaborate precautions that had, over the years, become a family tradition. Yes, I was in my sepulcher, but I was not trapped. 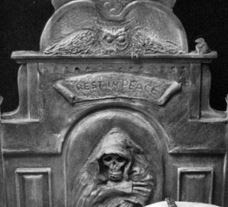 Forcing myself to calmness, I pressed on the capstone above my head. At first, it did not budge, and the fear built inside me again. Steady pressure, though, soon caused the stone to swing outward, revealing the contours of the tomb beyond.The catacombs beneath Frost Hall are dark, but not lightless.  The tradition started by my mother requires that a series of oil lamps always remain lit within.  These lamps do not shed enough light for a normal person to navigate easily, but they are more than adequate for someone just awakening from the total darkness of the crypt.

Using the dim illumination from the lamps, I made my way back through the deep tunnels to the tomb’s exit. Joy suffused my entire being as I burst through the door and back into my home. I ran through the halls, shouting: “I’m alive!  I’m alive!”

Frost Hall remained dark and silent; it must have been very late at night, and only the faintest glimmer of starlight leaked in through the mansion’s many-paned windows.

The first person I encountered was MacGinnis, the wine steward; he’d always had a penchant for late-night tippling.  Upon occasion, I had even joined his midnight libations. Far from being delighted to see me, though, MacGinnis turned white as a sheet, dropped his purloined bottle of brandy, and ran in the opposite direction, quickly vanishing into the manse’s darkened halls. Peggy, the housemaid, also fled my entreaties, as did Naill, the butler, after her, each raising enough racket to wake the dead. 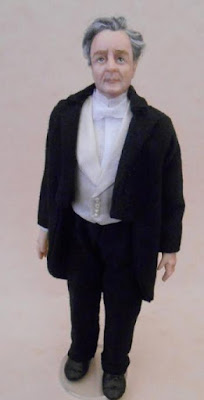 I must look a terrible fright, I realized.  How long had I slept in the tomb?

I determined to return to my room and repair my appearance before attempting to contact any more of the household or my family. My fingers, numb from disuse, fumbled with the doorknob to my chambers.  Eventually, though, the knob turned, and the big oak door gave me admittance.

Within, all was as I had left it on the night of my birthday party—save that a thick layer of dust covered my worldly possessions. No matter.  I’d soon have the maids set things right.
I moved to my dressing table mirror and sat down before it. Then I screamed. For staring back at me was a wide-eyed horror—a rotting corpse clad in a moldering purple dress.  Skin sloughed off the thing’s body in long, tattered strips; its grizzled hair fell over its bony gray shoulders; its white teeth shone through its lipless grin.

For a moment, I could not comprehend how this frightful ghoul had lodged itself in my mirror. Then I understood…


I feel so much better now.  I look better, too—as lovely as I did when I was alive. The rotting remains of what was once Violet Frost lie at the foot of my dressing table, cast aside like old clothing, its bony fingers almost touching the hem of my violet skirts...

(This is  a shortened version of the story. Read the full story and ending here.)

* Stephen D. Sullivan is author of a number of books including some original novelized versions and screenplays of of classic horror films.  His latest is an original comedy take on the classic "bad" horror film, MANOS - The Hands of Fate

* NOTE: Many of the artists have been featured in past Halloween in Miniature blogs. Be sure to check the top page link for more of their work and visit their websites!